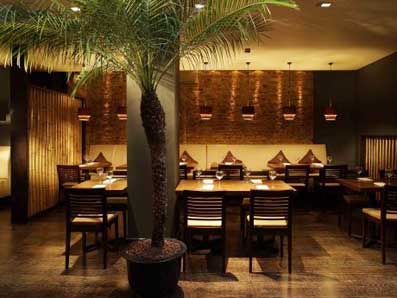 Brazilian Japanese fusion eh? Is that a strategically shaved raw fish? It’s an idea that sounds odd however you think about it, but with Sao Paulo home to the largest expat Japanese population it was inevitable that the two cuisines would come together. The question is would it be a car crash or something sexy?

Sexy is certainly the décor theme here, not for Sushinho the clean austerity of many a Japanese restaurant. Here dark corners, cool fires and a general air of sultriness make a perfect backdrop for Chelsea people with genetically honed faces and confident manners. It’s as much a bar as a restaurant with a cocktail list that is large and, for me, confusing because I don’t know what half these things are. Fortunately the waitress, who shows remarkable patience with the old man that, in dark places I have now become, peering helplessly at my menu, is full of advice and we end up with a Sakerinha (Akashi-Tai Sake passion fruit, blood orange.) Pleasant, quite strong and I start to feel a bit younger.

The food menu is a bit of a puzzler in itself. I am looking for that Brazilian/Japanese dish but what I seem to mostly see is either/or. With me is my guest, a Japanese lady who knows her Japanese cuisine backwards but who is open minded about the whole concept although she does call my attention to what she says are slight inaccuracies of names. Her interrogation of the Brazilian waitress is probably a bit unfair but we still don’t quite manage to work out the dish order. So we just make a selection and see what happens.

Her Miso soup she nods at, it’s okay and would pass muster in an average Japanese restaurant. My pumpkin soup with pimenta is basically pumpkin soup with a bit of spice served in a Japanese bowl so I drink it rather than spoon it. It could do with more seasoning but it’s fine. The hijiki sashimi pizza with anchovy aioli and jalapeno sounded intriguing and so it was. Made from a thin biscuit of a base it had some pretty vibrant flavours from the anchovy and the very hot jalapeno coming through. It was a bit tricky to eat though, the fish trying to get back to the sea each time but it was rather fun.

Hiramasa king fish carpaccio, pineapple and vanilla vinaigrette was a different kettle of fish entirely, if you will pardon the pun. We ordered it because it sounded very wrong and so it proved. Vanilla is a powerful flavouring and its aroma intense, the pineapple sliced wafer thin had a sharpness that offset that slightly and helped give the kingfish some life after death, but gastronomically it was filed under ‘interesting but never again’.

Chef’s selection of five pieces of nigiri, three pieces of maki, and two slices of sashimi,was considered a bit expensive for what we got and the portion size ‘rustic’ in purely Japanese terms. The fish was pretty well made overall though and a notch up from the chain sushi shovellers. Sushinho has a big choice and you could make an evening of it sticking to these and some drinks quite happily, although I am not at all sure about the Mediterraneo sushi – inside-out roll with mozzarella, rocket and sundried tomatoes is a fusion too far in my gaijin opinion.

The Sushinho roll, a tempura roll with salmon, crab, and cream cheese was another novelty. Served in slices it looked like a five lamp traffic light with the center of each roll a different colour. The panko crumb coating was on the thick side with a slight whiff of old oil about it, but they were certainly filling and despite the cream cheese, not unpleasant.

Finally a bit of meat in the shape of slow cooked pork belly, feijoada bean puree, and chilli mango. The belly was well presented with each slice on a bed of the rather insipid bean puree and was well cooked too, tender and tumbling apart. The mango needed more chilli for my taste but the bean puree aside, which is where we left it, a dish with some promise and ‘could do better’ on its school report.

Passion crumble with toffee ice cream and sesame tuile which sank in a generous portion of chocolate sauce was good, as was a rather exotic citrus martini and maracuja puree with lemon sorbet. Busy and buzzy Sushinho may appall the purists and the food snobs, but it isn’t after their custom anyway As fusion it’s a bit confused, but as food it’s fair enough. If you lived around here, you’d be a regular.