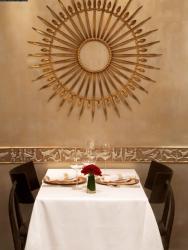 Tucked away in the money-laden back streets of Mayfair, Tamarind restaurant is by no means the new kid on the block. Established over 15 years ago, despite losing their Michelin star earlier this year, they still remain the original culinary big-hitter of Anglo-Indian cuisine. The first ever Indian restaurant in the world to be awarded a Michelin star in 2001, firmly establishing its place as one of London’s finest restaurants.

The chic wood-clad exterior reveals a dimly lit interior, extravagant with marble, mirrors and gilt-edge trim. This is definitely an ‘Old-Money’ joint and the interior design was clearly carefully deliberated over and not just conjured up to keep up with whatever trend was cool at the time. The dining room itself is packed with diners and my guest and I are escorted to our table, adjacent to the glass panel that separates the kitchen from the dining room.

A quick glance around the room and it doesn’t take long to realise that this is not the kind of place people merely stumble across. It is a destination restaurant and is brimming with international diners and several tables of Japanese businessmen, an especially good sign, as the Japanese tend to be very discerning and rarely eat anywhere other than at the best establishments wherever they may happen to be. A few other couples and another table of Americans discussing business in between ‘Ooohs and ahhhs” over the food, are also present.

Our waiters are all dressed in slick black Nehru jackets, monogrammed with the word ‘Tamarind” and they seem to glide effortlessly across the floor in ghost-like fluid motions, discreetly tending to their clientele. Service is incredibly polished and not at all obtrusive, a quality which I prefer in restaurants.

I decided to leave my fate in the hands of the talented Executive Chef Alfred Prasad, who became the world’s youngest Indian Chef to secure a Michelin star when he made the transition from Sous Chef to Executive Head Chef at Tamarind back in 2002. Alfred’s incredibly calm character is immediately apparent and a peek into his kitchen reveals a well-oiled machine that operates in serene and controlled manner that still delivers what it should.

To begin, we were presented with a starter of assorted grilled delights from the Tandoor oven. Giants prawn, ‘double’ lamb chops, tender chicken breast, enormous scallops and wonderful chunks of Monkfish. The prawns were meaty and delicious, coated in a lightly spiced marinade and charred to perfection. The chicken, scallops and Monkfish were all excellent examples of Tandoor-oven cooking, expertly cooked and beautifully seared on the outside but retaining all the succulence and moisture on the inside. The lamb was definitely my favourite, crusted in a marinade made with Indian paneer cheese, which gave it the most wonderful velvety-smooth coating and allowed the meat itself to remain incredibly moist and soft, so much so it was hard to believe that it was cooked in the searing temperatures of a Tandoor oven.

Still full from my starters, more food arrives to the table. Chicken Biryani, Kashmiri lamb shank, Kalonji aubergines and a basket of naan filled with dates and almonds. With nothing short of a feast laying in front of me and with the enthusiasm of a ‘Foie Gras’ Goose that has been starved all week, I try every dish ensuring I don’t miss out on anything. The Biryani is sealed with a layer of golden puff pastry to help steam cook the rice and chicken inside and the flavours were simply incredible. The delicate layering of the spices was expertly done so that no flavour overpowered any of its counterparts. The chicken itself was juicy and moist, which I must admit was surprising considering it was breast meat and overall it was a huge hit. The meat Glisre from our lamb shanks were expertly taken off the bone at our table by our waiter. The glistening and moist lamb slivers were delicately spiced with Kashmiri chillies, bearing all the super-soft, gelatinous meaty goodness that you would expect from a slow-cooked lamb shank, enrobed in a rich and fragrant tomato and chilli sauce that was so thick and wonderful it was more like a chutney and was a perfect accompaniment to the lamb. The aubergine dish was also great, but could not be placed in the same league as the other dishes. Perhaps I’m far too much of a salivating carnivore to be able to appreciate a vegetable dish, but when meat is being served, the vegetables tend to pale in comparison for me personally. Our date stuffed naan was exquisite. I can’t begin explain to you how something so simple could be so incredible, but we ate every last slice that was given to us. It’s a must try item as far as I’m concerned.

Indian desserts aren’t my favourite to be honest with you. Most are usually sickly sweet with far too much sugar and ghee, making them inedible for me. My guest being braver than I, decided to choose the Gajjar Halwa, which is a sort of fudge made with grated carrots and he absolutely adored it. I tried it and found the sweetness toned down, which made it far more palatable. I stuck to my preference of ice creams with a selection of Mango and Pistachio Kulfi and a wonderfully creamy rose petal ice cream that all suited me down to the ground.

With so many new ‘Contemporary Indian’ restaurants cropping up everywhere, Tamarind does sometimes get left out of the limelight. But what you should know about Tamarind is that they do not, nor have they ever, tried to be ‘Contemporary’, ‘Trendy’ or any other fad-following type of Indian restaurant. They have always stuck to doing what they do best… Classic, authentic and regional Indian food, using top quality ingredients and expertly prepared by people who value and respect the cultures and traditions of a diverse and colourful nation. So just because you don’t hear the name Tamarind on everybody’s lips, it doesn’t mean they aren’t being talked about. Because when it comes to superior and classic Indian cooking, those in the know, know just where to go.