It’s unseasonal for April, so Nik flees London for the fresh air of the South Coast, the fresh sand between his toes and the fresh food of The Gallivant at Rye. 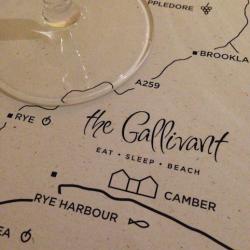 On a warm Friday afternoon in London, a madness begins to stir. You can feel it in the air – a crisp frantic build-up of energy, like a summer storm, growing in size until ready to crash down and cause untold chaos.

It starts early: disruption on the tube as minor incidents become major delays and line-after-line grinds to a halt.

London is in the grip of a seizure just as the workers pour from their office blocks, looking for the fastest route out of town. On the platform, a Mexican stand-off. Swift glances from each pair of eyes, looking for the board that reveals Armageddon and the nut that might crack first. 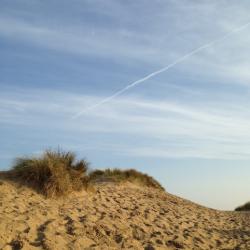 It’s tense. Escape is a must and the heart rate doesn’t slow until the wheels creak and begin to roll. Through the window sweeps city, industry, suburbia, retail parks and finally the green fields. Behind the glass, a collective sigh, the crack of ring pulls, the turn of the screw and the pop of corks.

Post-tube stress, it’s a refreshing end to the week and excellent start to the weekend. With each passing station, the passengers thin and the buildings become smaller and more remote. A calm blue sky and light white clouds cover an unbroken land of wool.

Rye – a brick built town, clinging to a crop of hills on the edge of Romney marsh – is only an hour away from London, if you take the high speed line. Bring on the future of travel. While Camber is a two-horse town wedged between the dunes and the fields. In the summer, tourists line the sand. Out of season, the wind drives the turbines. 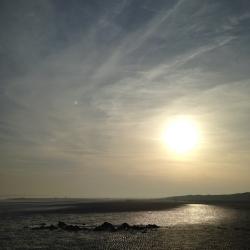 ‘You don’t look like a pair off to Pontins’, says the driver. Both a compliment, I gather and true. We’re visiting The Gallivant – a hotel and restaurant on the edge of that same two-horse town, metres away from the rolling sands.

Think quaint country house or imposing regal seaside hotel and you’d be wrong. The Gallivant is a modern bungalow that wouldn’t look out of place besides a motorway. Look, I’m just being honest.

Never judge a book by its cover though. Inside, the decoration is well-considered and well-maintained. Minimal, with a high degree of comfort and the trademark nods to the sea – lanterns, ropes, stones, that sort of thing. The rooms are small, but just as well appointed, and the bed is one you could sleep on for a lifetime – even with two shoes worth of sand between the sheets.

It’s a Friday. It’s early in the season. Yet the car park and restaurant are both busy. On the Saturday, they’ll be full. No better sign for the owner or a guest – this is a placed that’s clearly popular and for good reason. We start with an English sparkling wine – the award winning Chapel Down brut. Light, sweet, with hints of vanilla.

The wine is local, as almost 95% of the menu at The Gallivant is. The chef and owners have made an effort to source produce from within a ten mile radius. That’s doorstep local, not the ‘local = England’ local of some London restaurants. It’s an admirable approach, a restaurant investing in its local economy and one that pays dividends for the restaurant and the diner. A USP, local support and the freshest produce. 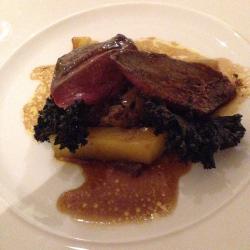 This approach does raise challenges though, the waiter and chef tell us, especially during the winter months. There’s a lot of sea out there and plenty of potatoes in the ground, but it takes real creativity and invention to fill a menu each day with something that interests and excites diners.

As you can imagine, the menu features plenty of fish, game, the aforementioned potatoes and small spring vegetables. To start pigeon, slow cooked for almost a day, yet still served pink. Tender, smooth, succulent, with crisp baked kale to add some bite. A starter to get the juices flowing. 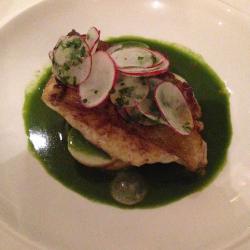 Then it’s on to a fish main. Cod, caught that morning. Delicate and light, it’s so far removed from anything pulled out of a fryer in London. Your teeth glide through the flesh and in seconds it’s almost gone.

And there lies my one criticism of The Gallivant – of the food, anyway. It’s refined food, good food, quality food, the kind I expect to find in London with another 66% stuck on the price. However, it’s caught in two minds. These dishes aren’t part of an a la carte, they’re part of a tasting menu – perhaps one with three or four more courses to boot. The pigeon was a starter, but the fish, a fish course, not a main. In a perfect world: amuse-bouche, starter, fish course, meat course, dessert.

I can understand why they don’t. The local market may not bite for a £70+ tasting menu; but in that case, up the portions. After the dessert – half of a rather good deconstructed pear strudel and half of an equally good orange cake with coconut ice-cream – I still felt there was room to go.

Don’t get me wrong, I don’t advocate gluttony (all of the time), I just wanted that bit more – the straw that would see me nursing a digestif before bed. 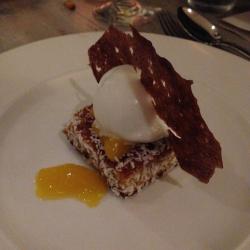 I’d make a small complaint about the drinks too, but this could just be nit-picking. The wine was fantastic. Wattle Creek, a punchy Chardonnay from California, with a rich nose of oak. A perfect compliment to the cod. The whisky on offer was a fairly meagre selection – nothing above the higher-end of the supermarket shelf.

As I said, knit picking, and a complaint that probably stems from my last six months spent swimming in some of the world’s best whisky. For that, I apologise, through a smile.

Portions and whisky aside, I’m a happy man having visited The Gallivant. A perfect tonic to a stressful week. A breath of fresh air and mouthful (or three) of delicious, delightful food.

As we left on Saturday, the wind whipped drizzle across the marsh and those same farms that grew the food for our plates. The lambs didn’t look worried. They’ll have another year before they pay a visit to The Gallivant and, perhaps, we’ll be back for another taste. Besides, it’s really not that far from London.

– Nick tackles a steak AND a lobster

– Tom leaves the comfort of his sofa for a Sunday brunch

– Nik timetravels to The Barbican to experience the future, 1970s style