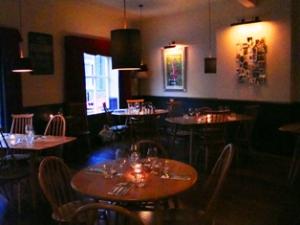 Set in Victoria Park Road, with Well Street Common to the front and Victoria Park itself at the rear, The Britannia is almost swathed in a haven of greenery. This imposing Victorian pub is cavernous and it is not until you walk through the entrance that you get a feel for the scale of the place. Not only does this rangy pub have three lounge areas plus a dining area, but great use is also made of the fairly large garden at the rear, which during the warm month is used as an outdoor cinema, the garden bench seating doubling up as an al fresco restaurant.

Anyway, to the purpose of the visit, to try out the food at this recently developed gastro pub. The menu is quite short, but reasonably priced, with five starters, six mains and four desserts (if you include the cheeses and biscuits), but it presents a good range of dishes. For our starters, the salad of warm smoked salmon and crayfish, pea sprouts and cauliflower puree had a hunk of salmon that had been cooked well, leaving it moist, flaky and slightly translucent in the middle sat on top of the creamy puree, supported nicely by the sweetness of the crayfish. The terrine of corn fed chicken with braised ham was precisely that, a good sized portion, the two meats tasty and succulent. We imagine the meats were cooked separately, before construction and anointing with aspic, in order to retain the juiciness – the terrine was served with a gooseberry puree, which had a sweet acidity and some toasted brioche that went well with it.

Mains of pan fried rib eye steak, medium rare came with confit tomatoes (roasted cherry tomatoes on the vine) watercress and a portion of smoked mashed potato. The steak had good flavour, nicely seared on the outside with a good pinkness throughout, al dente but still tender, the potato gave great support to it. The pan fried sea trout was the thick end of a fillet that had a delicate flavour, accompanied by a chive crème fraiche, some broad beans and roasted artichoke hearts. Another good dish, the artichoke hearts tasted like they were from a tin, but having been seared by the roasting process they were very pleasant. We ordered a side of sugar snap peas to go with mains, these were nicely crunchy.

For dessert, the fresh English cherry soup was, as you might imagine, strongly tasting of cherries and had a good acid sweetness to it, balanced by a quenelle of clotted cream. The apple and frangipane tart with rum and raisin ice cream was also good, though perhaps a little more ice cream would have helped it down more easily.

The Britannia has a decent wine list with several by the glass. We had a glass of Chenin Blanc each with our starter, this was quite full bodied but still very nice. With mains we had a bottle Grenacha, which had a smoothness on the tongue from the first sip and at about £15 it was reasonably priced. Service was good with an alertness to our needs . With good quality, well cooked dishes at reasonable prices, The Britannia is certainly worth visiting.