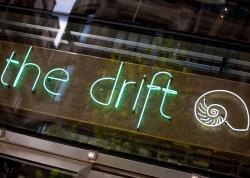 The entrance to Drift is around the side of the Heron Tower, but it’s worth going into the main reception to ‘ask directions’ just to get a whiff of that new building smell and stare in awe at the fish tank.

In fact it’s not so much a tank as Europe’s largest privately owned aquarium. It’s so massive you expect a heavily tied up James Bond to suddenly drop into it , and then a shark to appear looking peckish.

After security has firmly set you on the right path you find The Drift itself. A new London restaurant, triple-heighted, with a bar on the ground floor and the restaurant on the first, it’s clangy and modern but not unpleasant. The mix of seating, with tables of various heights plus large refectory ones that seat eight, means it caters for all pay grades in a pleasingly egalitarian manner

‘Looks like an IKEA canteen,’ said S rather harshly though as we sat down, but he mellowed and decided that actually he rather liked it. The open kitchen creates the right kind of buzz and the big Bose speakers dangling from the ceiling deliver quality sound, albeit at an erratic volume as if the DJ was fiddling with his hearing aid. ‘We’re having a few teething problems with the system,’ confided the waiter as the music suddenly jumped up so loudly we thought Bruce Forsyth had come on stage.

The menu is broad, all encompassing and remarkably low-priced. We’re talking All Bar One kind of prices here but the room is worth more. No wonder it was busy on a Thursday lunchtime. And it’s a menu of things you want to eat too, a roll call of simple crowd pleasers precision aimed at the target market.

Created by Drake & Morgan, the people behind The Folly and The Anthologist, it has the same smart thinking written all over it with sausages and mash, steak sandwiches, flatbreads, salads, burgers, fish and chips, pastas and more. Even my mother could find something to eat here.

How can you fault a board of charcuterie for two for £11? Only with difficulty, fat tasty olives, oil rich artichokes, a tangle of prosciutto, some not-so-great-to-be honest, chorizo and mortadella, that rather lunch boxy meat that works best in a sandwich, sun dried tomatoes and other bits and bobs. A good deal for the money with some decent enough Italian breads. 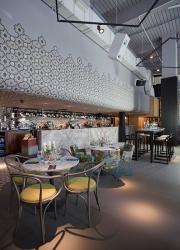 S looked with some dismay at his pint of lager; when he’d ordered a Peroni he’d assumed it would come in a bottle not an oik-glass but he was happy to drink it all the same.

At least it didn’t come on a wooden board because everything else at Drift does, even the desserts. If London ever floods customers at Drift will be able to paddle away holding their boards in front of them like novice swimmers.

His 10-oz sirloin steak on a board was properly cooked the way he asked for it, juicy and with good flavour and properly seared on the outside. The string of vine cherry tomatoes hadn’t been cooked though, which was a shame, so he left them on the side. The chips came in a dinky flowerpot, but not to be thwarted by such logistics, chef simply put the flowerpot on a board. You have to admire the dogged consistency on display.

I had a special – Sea bass on rosemary potatoes with cucumber and mint sour cream and this was the only really duff note. The skin wasn’t crisp at all so the fish was limp and unattractive on its board and it sagged over the otherwise interesting spuds as if exhausted by the effort of getting there. Too low a heat in the pan when it went on so that the flavour of the skin was sadly lost. The steak chef could give the fish man some tips here as it was a small sea bass but it could still have risen to the occasion.

Cocktail desserts eh? Well we had to try. The Ginger Biscuit dessert was brilliant, it tasted just like a ginger nut biscuit with added cream and alcohol, and the Crème Brulee cocktail dessert was almost as good. And, at around £6, reasonably priced like everything else at The Drift.

It ‘s hard to find things to truly carp about at The Drift and rather pointless to try. They’ve thought about what the local workers want and delivered it without cynicism and with some panache. A decent wine list, a proper bar , cocktails a go go and prices that are affordable. Do I like it? Well you get my drift, I’m sure.