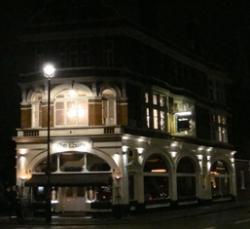 Part of the First Restaurant Group chain, The Ebury has an imposing presence, occupying a prime location at the fork of Pimlico Road and Ranelagh Grove, very near to Ebury Bridge. It’s hard to miss it. As you enter this bar/restaurant you are immediately confronted by its size, tasteful decor furnishings and style. It is an attractive and comfortable place to relax and eat.

As we were led to our table, we immediately spotted at the bar numerous carafes of iced water with lemon slices in, which we wholeheartedly approved of. We were given menus and the wine list and asked if we would like some water and of course, we asked for a carafe. We chose our meals and for starters we decided to share the goat’s cheese beignet, served with tomato chutney and balsamic glaze dressed rocket, this was lovely. The 3” diameter disc of cheese, just getting to oozing point, was sat on top of the thin, light crisp edged base. The sharpness of the cheese was well paired with the sweetness of the tomato chutney and nicely supported by the dressed rocket. With this we had the Spanish charcuterie, manchego and olives. Presented rustic style, on a board, the thinly sliced full flavoured cured meats (ham and sausages) were accompanied well by the small dish of mixed olives and cheese. These were two very good starters.

We moved on to mains and the duck breast with dauphinoise potato and green peppercorn cream was excellent, the meat was served beautifully pink, medium to medium rare as ordered, it had some firmness but was tender and had a great flavour. The potato cake was thinly layered tasty with a good creaminess to it and the sauce supported the dish very well. The braised lamb shank, butter bean, red pepper and chorizo casserole was another really good dish. The meat just fell off the bone, melting in the mouth, it had great flavour. The casserole was hearty, and the contrasting flavours went well with the meat. At the suggestion of our waitress we had chosen side dishes, the rosemary new potatoes and the French beans & sesame seeds stood out for us. Each of these were excellent, just the right amount of rosemary on the potato to perfume, rather than overpower and a really nice sesame flavour on the beans, which were cooked perfectly, al dente as they should be. Perhaps unsurprisingly, we didn’t finish either of the sides but we were very pleased we had ordered them.

We would have been happy to have stopped there, we were both quite sated, but just for you dear reader, we felt we must go on to dessert. The affogato was the lightest choice, so PA went for that, the heat and strength of the coffee paired well with the chill of the vanilla ice cream. Light but good flavours mixing together, this was a good choice to end the meal. I, on the other hand, thought ‘to hell with the waist line’ and went for the sticky date pudding with butterscotch sauce and vanilla ice cream. This was severely decadent dish, the moist warm pudding sitting in the sweet sauce was divine and the ice cream contrasted well with them, the warm and the cold was great.

With our starters we had a 500 ml carafe of a fruity South African Chenin Blanc, and with mains a bottle of Billi Billi Shiraz, which had a good softness in the mouth, both were reasonably priced. Service was really good, even though we were sat in a corner (and quite happy about that) our waitress still noticed when glasses were nearly empty and filled them for us. The Ebury has recently been awarded two AA rosettes, for the fourth year running, which they are quite rightly proud of and richly deserve. This is a good destination to head for.