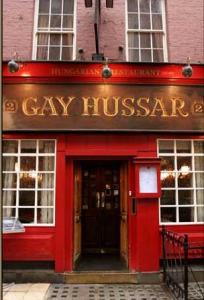 It’s easy to knock isn’t it? Much easier than praising. For one thing when you say a restaurant is fantastic and wonderful, it sounds creepy no matter how genuine you are.

Knocking a place though is so much simpler. It’s a sad fact that many people read restaurant reviews on a sort of Lions v Christians basis, fervently hoping to see some blood. And there are some reviewers who hover like vultures over Twitter, waiting for a sniff of something dying so that they can flap down to tear off their share of the easy meat.

So let’s be clear: The Gay Hussar should by rights be a wildebeest staggering in decreasing circles under a pitiless sun. And yet it continues to be if not popular with the critics, still popular with its regulars.

This has historic roots, so if you’ll pull up a chair while I light my pipe, I shall explain.

Socialists once had problems with restaurants. Back in the 60’s when the Hussar first rode into town this was particularly so. The working class ate in cafes, not restaurants, the latter were effete places for the aristocracy and not for the peoples’ elected representatives. Not until Tony Blair came along was the idea of a Labour MP regularly dropping a few hundred quid in a trendy restaurant acceptable. As Anthony shrewdly anticipated it actually endeared him to the liberal elite, some of whom were even richer than he was, by validating their own lifestyles.

B.T. (Before Tony) though to be a Labour MP and to be seen in a restaurant was to invite accusations featuring the words ‘class’ and ‘traitor’. However the Labour MPs of the time were just as well paid as their Conservative counterparts and just as greedy and felt they deserved to dine a bit better than the people they represented, owing to their obvious intellectual superiority.

The Gay Hussar could have been designed just for them. It served up, at the time of the Cold War, what at a pinch could be called Communist food (no foie gras here Comrade, just good honest cabbage), was in a part of London that wasn’t Knightsbridge and which, back then, had a reassuringly down market feel. It was also handily placed for rent boys, strippers and prostitutes, a point not wasted on the corpulent drunks who filled up the benches of both sides of the House at the time.

And so it became the place to proudly lunch and dine and even Conservative MPs joined in the fun, as well as the political hacks. It was an off the record sort of place where bad behaviour was not reported, free speech could be made and much drink could be consumed. Of course no one gave a flying picket about the food.

Today with MPs of all sides little more than jellies in suits, frightened to say boo to a goose and only interested in their puerile careers and a knighthood, The Gay Hussar is host to a dwindling band of the old crowd. Most are, thankfully, no longer sexually active and many have to swallow a cocktails of pills before eating anything in order to counter their various ailments. Some don’t even drink any more.

The place still feels comfy though, in a beaten up kind of way. Rowland’s cartoons of MPs, the majority of whom are now dead, in the House of Lords or sometimes both, conjure up some of the fun that was had here in the old days. The books, of no doubt signed, memoirs are still stacked up and TB himself smiles his vacuous clown grin down at the diners from his book jacket. ‘Ha, ha suckers, I had you all,’ he seems to be saying.

The food is still Hungarian, still rather offbeat, filling and determinedly unfashionable. To say I liked it a lot would be a lie, but I didn’t actively dislike it either. The Goulash soup certainly hit the spot on a freezing cold day, the paprika heating me up nicely. 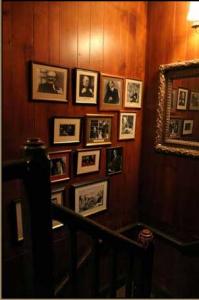 Marinated Fillet of Herring with Soured Cream was a decent bit of fish and while the red peppers were cold and hard and under ripe, mashed up with the soured cream they went down bearably well and offered some lightness.

Crispy Roast Duck with Hungarian Potatoes, Red Cabbage and Apple Sauce was actually really rather good. The duck had a beautifully crispy skin, the best bit of any bird in my opinion, and the meat was confit tender. Hungarian mashed potatoes turned out to be mash with soured cream, butter with an egg whipped in so it cooked in the mash’s heat. Tasty.

Red cabbage may have the right political colour but I’ve never liked it much. Its main advantage is that, like beetroot the other Commie stalwart, you can dig it out of the frozen steppes and it will still be viable. This is handy when you’re an oppressed peasant and the Bourgeoisie keeps taking all your good crops to put them on the menu in Islington restaurants.

Dobos Torte for dessert, a seven layered sponge cake made with chocolate buttermilk and crowned with caramel, was a bit rich for my austere taste in puddings. The socialists seem to like it though.

So The Gay Hussar; should we snicker at its name, poke fun at its cooking or just accept it as a London landmark? In a town of such massive restaurant choice, but so little restaurant character, I think we should be glad it’s still with us and not been turned into a Starbucks.

Don’t have high expectations of the food and you won’t be let down. Just go for the fun of it and to smell the naive hopes of Old Labour still forlornly hanging in the air.