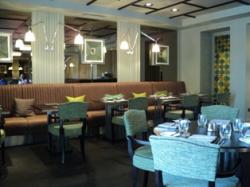 It was Royal Ascot week when we decided to go to The Lock at The Runnymede-on-Thames Hotel, but we weren’t aware of that until we arrived at Clapham Junction for the Egham Train. There they all were, formally dressed men in what looked like ill-fitting hired suits and their partners wearing what seemed to be as little as possible apart from rather overly decorated hats, it was an amusing sight. Having arrived at Egham and having consulted multimap, The Runnymede-on-Thames looked an easy walk from the station, it was a sunny day, so walk we did. Whilst it is only about a 15 minute stroll, it is not necessarily a walk for the faint hearted. As you get close to the hotel there is a substantial roundabout with some 5 junctions, two of which service the M25 that runs close by. Traffic was constant, so you have to be sprightly in traversing the roads. Once in the grounds we walked along the approach road and as the hotel opened up before us, The Lock entrance featured prominently at the front.

We entered and were received at the desk, from where we were shown to our table. The Lock was only finished a few months ago and the decor is bright and fresh, an interesting eclectic mix of styles that comes together well; it has a kind of timeless quality, neither ultra modern, nor seated in past. The restaurant has a huge patio allowing outside dining for those who wish to do so. Unusually, this patio is a non-smoking area, but there is a discrete area set aside for those who wish to have a smoke. This is a good thing as the setting, despite its closeness to the M25 is lovely, very green, with the river running only yards from the building and of course, the lock – after which the restaurant is named – immediately adjacent to the grass verge that surrounds the external dining area.

Enough about the setting, on to the meal. Starters of grilled prawn and squid brochette, with a salad of puy lentils, baby spinach and basil was lovely, both the prawns and the squid cooked well and tasty and paired well with their accompanying salad. The rare beef salad with rocket, a starter from the fixed price lunch menu, was very good, the beef had been seared then sliced, the tender meat then presented on some well dressed rocket leaves. Each of these dishes a great to start our meal

The Lock has a Josper oven, a bit like an indoor barbecue and there was a selection of dishes from it on the menu. The rib steak on the bone was a monster of a piece of meat, served medium rare as ordered, it was both tasty and tender and came with a variety of vegetables, that were cooked perfectly. The free range chicken breast that had been marinated in lemon and thyme also finished off in the Josper, was another tender juicy piece of meat its flavour enhanced by the marinade. This came with some grilled ratte potatoes and spinach, and an aromatic sauce that brought the dish together well. We also ordered a dish of Josper roast summer vegetables, and they were excellent, having been given that slight smoky barbecue flavour from their cooking in the Josper.

After a bit of a rest we decided to tackle desserts, the tarte citron with pistachio ice cream was remarkably refreshing and a particularly good choice after the rib steak; it had a great sharp lemon flavour, as you would expect and the ice cream balanced it well. The Raspberry vacherin was another refreshing dish with good fruit flavour and just a hint of decadence from the Chantilly cream. Two very good desserts, each sweet but with a good zingy tang to them.

Wines at The Lock start at £15 per bottle, which is very reasonable; we each had a glass of muscadet with our starters and it was nicely dry and fresh tasting; the Chilean merlot was a good match with the rib steak, as was the Cotes du Rhone with the chicken – all three selections came from their by the glass selection. Service was very good and attentive throughout the meal. The Lock is an excellent restaurant to seek out and go to for lunch or dinner. The decor in the restaurant is relaxing and makes for a great setting in which to sit and enjoy a meal, the patio should you wish to eat outside has a great outlook, indeed so do many of the tables, from the picture windows that look over the river bank and lock. With great views and really good food, this is a place worth making your way to, by car or on foot, if you do decide to walk from the station. A little spring in your step in crossing the roads might be just the thing to help build up the appetite for the hearty offerings on their menu.