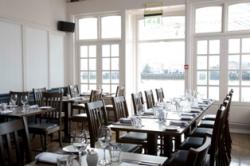 The Narrow is amazingly well situated, set as it is, next to the lock that leads into Limehouse Basin, it has excellent views from the bend in the river, towards central London to the west and Docklands to the East. This Gastro pub in the Gordon Ramsay chain has been vastly extended by a huge conservatory structure that wraps around two sides of the building and which, we understand, has a retractable roof so that patrons can enjoy eating in the open in the summer months. The core pub itself has a good feel retaining what seems to be much of its original character.

As we sat overlooking the two aspects of the Thames we pondered what we might have to eat. For starters we eventually decided on the herb crusted scallops and the smoked salmon fishcakes. The scallops came on the half shell, three perfectly cooked scallops with their herb crust and some very delicate garlic butter. The fishcakes were two sizeable crispy coated cakes, with their soft centred flavoured by the smoked salmon and well supported by some good tartare sauce, they were both very good dishes.

We moved on to mains. The rump of lamb, served medium rare was excellent, juicy and tender with good flavour, this was supported by a cake of confit shoulder, some creamed celeriac and potato cake and some nice jus, this was a really good dish, which came together very well. The poached chicken breast was amazingly soft, and tender, it had a lovely texture. Accompanied by some wilted spinach, roasted turnips and beetroot crisps, its constituent parts combined well to make another great dish. With these two mains we had a dish of crushed brussel sprouts and chestnuts, cut in half, rather than ‘crushed’ the sprouts were cooked perfectly for us, still retaining some bite and they were well matched by a good amount of soft chestnut pieces.

For dessert the chocolate, brandy and prune slice was incredibly rich with a firm texture, the three elements coming together to make a sinfully adult confection that was rewarding both from its texture and its flavour, the prune and the brandy both coming through on the palate. A velvety peanut butter ice cream supported the dish well. The bread and butter pudding was light and fluffy with a touch of fruitiness from the cherries and some crunchy nuttiness from the toasted hazelnuts; this was a lovely bowlful of comfort food.

Wines at The Narrow range upwards from just over £14 a bottle we tried the ‘house white’ which was nicely crisp, dry and fruity. With our mains we had a Toro Tempranillo which was soft and velvety on the tongue and was well worth its £22 price tag. Service at The Narrow was attentive, the staff were very helpful. All in all, The Narrow are serving some very good food at reasonable prices, this combined with its excellent riverside views make it a great place for lunch or an evening meal.