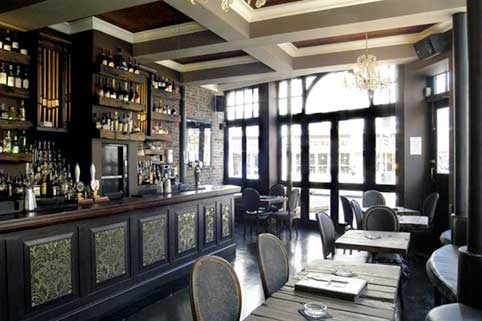 It’s an odd part of London this, lacking a particular character. New Oxford Street has a grand name for sure, but it’s rather featureless and with more than its fair share of 70’s office blocks. It’s an area that would probably like to be regarded as Holborn, or a part of Bloomsbury, but it’s chiefly famous for having a large branch of Jessops.

The Old Crown is one of the older buildings. It probably wasn’t designed to be a pub, perhaps originally a shop, and it is in estate-agent parlance ‘bijou’. That means small. In the summer it has floor to ceiling windows that open invitingly wide, a cool corner location and tables outside that look like they were made from old railway sleepers or similar. Chunky chic.

I can see it being cosy in winter and it’s welcoming this lunchtime as I gasp up to the bar, happy to be out of the blazing sun. They only have two ales on, which is disappointing, and one of those, the Spitfire, has apparently crashed somewhere so that leaves only one. I know bitter is not as big a seller as lager but I do wish pubs would make an effort to do more. They are sourcing food locally so why not the beer?

Anyway the guest beer, whose name I have forgotten but I had three pints of it so it must have been okay, is wet and refreshing and the lunch menu looks good too. Not as ambitious as the evening menu which has Stuffed Squid with rice and thyme topped with fresh tomato sauce, Marinated organic rack of lamb served potatoes dauphinoise and provincial roasted tomatoes and Grilled swordfish, on a pan fried salad with olive, fennel, cherry tomatoes, courgettes and rocket with a lemon vinaigrette to breathlessly name but three.

The lunch menu in fact looks sensibly geared to the needs of people who don’t have long to eat and a boss back at the office who is tapping his watch and wondering how to cut staff costs further. These days you don’t want to be the last person back to your desk, that’s for sure.

I go for the latter because I do like burgers, anywhere but at the clown’s place, and they aren’t a bad test of chef. They are nearly always a problem to eat though. Some places make them so big that you have to dislocate your jaw like a python to get a bite. Then you can’t put the damn thing down again because it is only the vice-like grip of your hands that is holding the whole sodden mass of it all together.

The Old Crown burger comes with meat that is pleasingly irregularly shaped, more a loose ball than a patty, and that’s reassuring. Looks like it’s hand made. It’s also been nicely frazzled on the outside, but is not as pink as I personally prefer inside. My bun seems to have suffered some kind of accident at the makers as the bottom has had a bit sliced off somewhere. This makes it less than supportive of the filling and a tricky handful. It’s good though and I manage to set it down safely to get some of the fries. A homemade tomato relish isn’t bad at all, but the cheese is a bit bland and the gherkin could have been bigger. The meat’s the thing though and that’s good and juicy. The salady stuff is crisp.

I’d be interested to see what the evening food is like, it promises a more restauranty experience, and the place seems buzzy and youthful for a pub, which is good. If they can get the Spitfire back in the air, or maybe a whole squadron of ales, it would be nicer still.