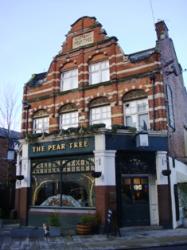 Set in the middle of a residential area, The Pear Tree pretty much epitomises the archetypal ‘local’. This early Victorian pub stands out, surrounded as it is by somewhat more modern flats and houses. It is a little off the beaten track so it’s not the type of place that you would just stumble across. But this example of 1840’s architecture is worth looking out. Boasting a good many original features, the new owners are gradually working through renovations and it is to be hoped restoring it to its former glory before too long. The main feature of the pub is its ‘D’ shaped bar that juts out into the middle of its lounge and seems somehow disproportionate to the room. The new owners introduced the ‘gastro’ element to the pub back in mid January and it looks to be pretty popular with their clientele. The menu at The Pear Tree, which is written on a chalkboard to one side of the bar area, changes almost daily we were told. It contains some interesting dishes. There are smaller chalkboards dotted around the bar area with snacks and dessert options featured on them.

We were pondering what we might eat when one of the bar snacks caught our eye, the home made scotch egg served with honey mustard and having been told that it was ‘awesome’ by the licensee we knew we had to try it, so shared one between us. It really didn’t disappoint. Its crispy bread-crumbed exterior contained the egg, which had a runny yolk, wrapped with some good quality sausage-meat. The licensee’s description was not far out, it was excellent. By the time this arrived we had chosen our meal proper. Starters of duck rillette with salami which came with some toast red onion marmalade and shredded cornichons, was a well balanced dish. This and the vegetable tempura with a soy and ginger dipping sauce were both good dishes. Each were quite substantial and having snacked on half a scotch egg each we could have managed sharing just one of them, but as you know, we strive to tell you about as much of the menu as we can, wherever we eat.

Mains of sirloin steak and chips with an artichoke puree was a good sized hunk of meat that was cooked perfectly, medium rare as ordered, the steak came with a decent red wine jus, the chips were big and nicely crisp and the puree had some texture slightly grainy, which I liked. The warm chicken salad was a massive plate of food, comprised of numerous discs of tender chicken, that had been stuffed with peppers and onion, with melted brie and oven baked mushrooms scattered over the mound of salad leaves. These were two substantial, hearty dishes.

We waited a while before choosing dessert, there were two on the menu, a chocolate terrine with vanilla ice cream and the banana pancake with caramel sauce, clearly we had to have one of each. The pancake had a nice crispiness to it, folded over some sliced banana and caramel with more sliced banana and cream on the side, the terrine was three thick slices of what was, in effect a fairly solid chocolate ganache that had a rich full chocolate flavour. The ice cream worked with the terrine balancing its richness well.

Drinks at The Pear Tree are as you might expect; they have a small list of wines that are reasonably priced, ranging from around £14 to around £20 per bottle, several of these are served by the glass. I drank Old Speckled Hen but the sauvignon blanc and the merlot were both good wines. Service was attentive throughout the meal, the licensees and staff were friendly and helpful, it has a good atmosphere. It is true to say that The Pear Tree is a work in progress, we understand there are plans to create a dining room to the rear over time as well as continuing the restorative work that is currently under way. The place is already a popular haunt for locals and I can see that developing, as well as the prospect of attracting those further afield.