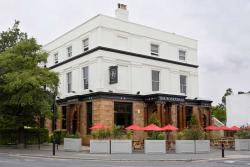 I once heard a food writer say ‘Oh we don’t like chain restaurants’. I assumed he was using the royal ‘we’ but no. Apparently he was referring to some mysterious cabal, the admission criteria being snobbery.

He might have liked it at The Rosendale though, as the clientele has upper middle class written all over it. Close enough to Dulwich to draw in the local wealth, The Rosendale on our night was packed with thick-haired young men and beautiful blonde girls all drawn from the same gene pool and already firmly set on their Life Cruise Control.

Saved from ruin some years ago this lovely old boozer has real character and could well be in Highgate or Islington instead of, technically I think, West Norwood. Renaissance Pubs has done it out nicely in Gastro Pub, the new paint from Farrow and Ball, and it has a decent outside area for smoking, a garden and plenty of space to park prams. One of which is quite important to me.

The menu is compact, which is never a bad thing, and the wait staff the cheerful non-professionals who are the life blood of these kinds of places. Of course this means they forget things, such as asking us if we wanted bread for example.

The menu had novelty on offer, such as mackerel and sun-dried tomato on sour dough bruschetta and ham-hock and chicken croquettes with piccalilli, but I went for squid and cuttlefish with fennel and chorizo. P for the goat’s cheese pannacotta with beetroot crisps and caponata. ‘It sounds different,’ she said, still vaguely looking around for the non-existent bread. 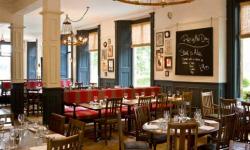 Starters appeared almost instantaneously, never a good sign in my book, and so it proved. The squid and cuttlefish were tender but fridge-cold and the chorizo, bizarrely, had been nowhere near a hot pan, just chunked up and thrown in.

Chorizo won’t kill you served ‘raw’ but I might if you try to serve it to me. This prince of pork product needs to be sizzled to give it texture and, most importantly, to release its spicy golden oil. If the kitchen had taken the time to do that simple thing, it would have vastly improved the dish, taking the mortuary chill off and punching in real flavours.

The Pannacotta and caponata dish was actually rather good though, with the cheese delicate and the caponata tautly tart, P’s only complaint being the silly-large plate it came on and the sad three slices of supermarket baguette on the side. Better presentation and this starter could have been super.

Fortunately all this pre-prepared starters meant the kitchen was saving its big guns to devote resources to the mains. First up was sea bass seared in a Josper grill, that ultra-hot ‘oven’ that cooks in seconds. It’s ideal for steaks but a bit risky for delicates, the chances of the fish going up in flames must be very high.

P’s fish survived the heat but the wait, presumably while my dish was plated, meant it had then gone a bit cold. Not drastically so and she reported a great piece of fish with good char and well supported by some tender samphire, crayfish and rouille. A portion of chips had enough heat to make up for the cool fish and were decently cooked, crispy without being crunchy.

My Guinea fowl breast with confit leg was a top bird. The breast was moist and there was plenty of it and the confit was superb, this meat really responding to being slow cooked in its own fat. I liked the creamy leeks with it, although the peas looked a bit lost, and the potato fondant was good for mopping up the juices.

You have to have sticky toffee pudding in a gastro pub don’t you, so P did. It was fine she said but again lukewarm. The custard that the kitchen kindly substituted for cream, helped heat it up and it was as good as it gets I suppose.

My Banoffie pie was too much, a big old slab with banana ‘wheels’ making it look like a steam train waiting in a siding. That may not be a criticism for some people, but for me it felt crude and almost Harvester-ish in concept. It was fine if you like that kind of thing.

The place was completely packed and overall I think rightly so. There is a dearth of places in the area guaranteed to be hoodie-free on a Friday night. It’s filling a gap very well and the food is better than you’d expect at the price point and could be even better with a little tuning.

We liked The Rosendale and, to declare an interest, it’s handily close to our allotment for our Sunday lunch. ‘We’ will be back.