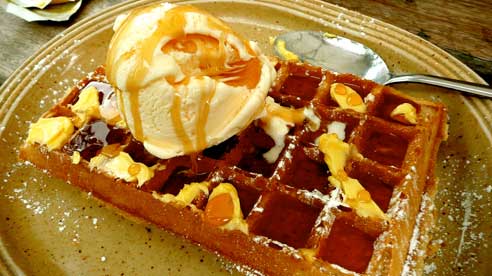 As a student, I toiled in an English vineyard, untangling tendrils, snipping windbreaks and scything through as much prejudice as weeds. It was hard, wet work, but kept me fit. Only cash caused problems. It took 300 hours to score £1,000. But nine years on, that still beats writing… Q. What do you call a commissioning editor? A. Writer’s block.

Its owner, Sam, was a prime salvager of pedigree tat. Guarding the drive, coade lions came from Nonsuch Park, the pillars propping the winery from Waterloo Station, and the winery barn (moved brick by numbered brick) from down the road. I really liked another find, a slender shop-front, tacked to the visitor centre. It had come off a little café famous, before the bulldozer came, for its Belgian waffles. Lighter, crispier and deeper pocketed then the thinner American, chewy Liège, heart-shaped Scandinavian and Dutch syrup sandwich.

Sam dreamt of bringing back dishes from the original menu: the bacon and egg ‘May Ball’ breakfast, the Ratatouille (ordered as ‘a Rat’) and the wildly hedonistic, Crème Chantilly with maple syrup. Having preserved the range and gimballed irons, he planned to install them in this idyllic new home, firing them up to a fortune. But family politics blocked the way.

I found a good ‘Waffle House’ whilst at UEA University. At the time, Norwich had become a national joke with kind regards to Alan Partridge, then at his peak. Unravelling behind a Georgian exterior was an intoxicatingly scented bohemian burrow: wicker shades, earthenware plates, organic batter and a sign advising patrons to ‘please wait to be Eated’.

Inspired by Sam and the Waffle House, I wanted to buy an iron of my own. But cook-shops could only offer me flimsy contraptions which crimped waffles in gaudy shapes. I set my sights further. £100 bought both a return flight to Brussels and a beautiful Teflon machine capable of baking two waffles at once. I have since crafted mixes that smell sublime enough to sell a house.

Last Sunday I discovered that Norwich’s Waffle House has siblings. One in South Africa; the other, St. Albans. Established 25 years ago, the one closer to home takes the heavenly setting of a sixteenth century mill where the river Ver still turns the paddles

Catching jasmine scents beside a stream, I sipped a thick malty milkshake from a narrow straw, which thoughtfully slowed the flow. Organic flour is ground upstream between French Burr stones. These contain quartz crystals meaning sharp grinding edges which won’t chip into the flour. With every tinkle of the service bell, hungry anticipation grew.

But by dessert, she naughtily gave way to a craving for plain flour. Into every quadrant of an already lavishly dressed waffle – vanilla ice cream and strawberries with an uplifting fragrance – she flooded every crispy quadrant with smoky, sticky maple syrup, topping-up where it leaked away. It looked like amber. She was in ecstasy, scooping textures and temperatures, repeatedly uttering, ‘Oh my God! Oh my God!” Having been moved to make a Belgian recce years ago, I understood her reaction.

The 70-space car park was full. The queue for tables stretched beyond the mill, towards the epic Verulamium Park. It seemed that everyone wanted a bite of those waffles.

After a pristine macchiato to calm sugar shakes, I thought back to Sam, since freed from this mortal coil. If his family had had time for his vision, his vineyard waffle restaurant could have earned them a fortune. He had nostalgia in his heart, but business in his brain…