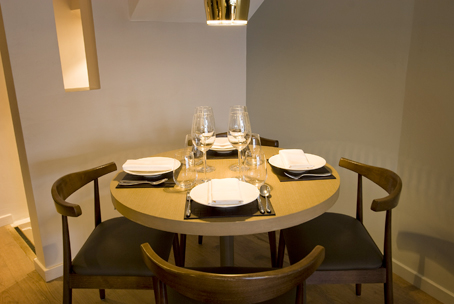 Trishna is a new breed ‘Indian’ with stylish little copper lampshades that hang intimately over each table, bare brick walls painted a fashionable grey and even some of the original wood panelling left to add a bit of tone. So it’s somewhere to fine dine, not a spot to indulge in a post-pub frenzy. That the food hasn’t the coarse kick associated with more traditional British-Indian restaurants is to be applauded; it’s time for the food to come out from under the spice.

Big doors on the second downstairs room will fold back in summer to let in the light, but it has to be said that at this time of year they are letting in one hell of a draught. At the end of our long lunchtime session I couldn’t feel my legs. That it was a long lunch was due to a slight slowness in getting the dishes out, the delay just crossing that restaurant Rubicon where pleasantly paced gets to be ‘where’s my next course?’. It didn’t bother us, though, we had all the time in the world and the dishes of the tasting menu were well worth waiting for.

That tasting menu is just £35 -the price of a starter and main in some places. The portions are small, as they should be if you want to get to the finishing post in a fit state to walk out, and are perfectly judged with the rice and bread appearing towards the end so as not to tempt you to pig out too early. Trishna’s emphasis is on fish and seafood, all sourced as much as possible from UK waters and not flown in frozen from Asia. This means not only is the taste better but we can also eat innocent of air mile abuse. These things are all going to matter more and more as 2009 unfolds.

A scallop each kicked off the feast; perfectly cooked lightly warmed with garlic and spiced with the tiniest pinprick of fresh chilli, they were gone in moments, but the subtle taste lingered on. These were followed by beautifully fried squid looking like ethereal buttered popcorn and without a trace of oil. The batter was made from spiced rice flour and the dusting of chilli salt and lime zest was delicate and delicious. A signature dish I think. Then a king prawn, spiit and grilled perfectly so that the sweet flesh was a joy to scrape out.

Bream came under a vibrant green blanket of mint and coriander that was just the thing to set off this mild fish without drowning it. Charred tomatoes on the side gave a smoky sweetness and a light touch with the chilli gently reminded you that this was an Asian dish despite appearances. Isle of Shuna mussels simmered in a coconut and turmeric masala had that briny centre that says freshness and the only thing we regretted was that while the mussels came in a single bowl for us both to dive into, our plates were flat so that any attempt to ladle the masala out was doomed to failure. Nothing daunted we used our dessert spoons and cheerfully went for it direct from bowl to mouth using the small nans that had now appeared to mop up.

After all this fish the appearance of some meat was welcome. Lamb chops coated in a marinade of ginger and Kashmiri chilli were superb and we gnawed them down to the bone and beyond. At this point the rice came out, each grain fluffy and separate as the old Uncle Ben’s ads used to say, not that Uncle Ben had been anywhere near this of course. This rice partnered the Market Fish curry; sea bass under a rich sauce based on the classic trio of cumin, chilli and coriander with roasted coconut to add thickness to the tomato base. Some small potatoes, skin still on, were served lightly boiled and rolled in a salty sour spice mix which made them totally addictive.

Dessert of a Carrot Halwa with Pistachio ice cream was like a sticky, syrup laden carrot cake and was perfect, as was service throughout. These coolly elegant young women had two old geezers pausing every now and then to gaze wistfully into the middle distance and say ‘Remember when…?’

That dining companion was to write in a text to me later that day, ‘whatever happened to long lunches like that? Where did it all go wrong? That was really excellent.’ And he was absolutely right, it really was.