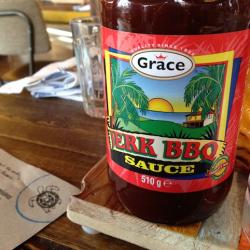 There’s always a ‘new black’ in food. Tapas, gourmet burgers, smoked meats, small plates, sharing plates and back to tapas again. I’m sure over the years every cuisine will get its chance. We’ve had Mongolian grills, Slovakian stews and Korean BBQ, so anything’s possible.

Jamaican food probably stepped off the boat in about 1948, yet to my ignorant knowledge, short of Levi Root’s sauce there’s never been a craze for it. No salt fish haut cuisine, no pulled curry goat, no Gourmet Patty Kitchen.

Maybe there are, maybe I’ve just not noticed them, or maybe it’s a taste that’s still too niche – too spicy for the delicate English palate anyway. A Jamaican curry can make a jalfrezi seem like a birthday present. 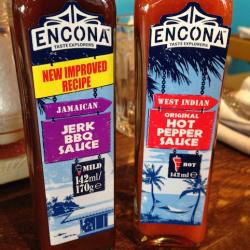 There are rumblings though. Rum Shack (with it’s hideously dry burger), Boom Burger (which I haven’t tried) and Fish Wings & Tings (a great value dinner) are all popular and/or well promoted stalwarts of Jamaican cuisine. Again, none are exactly high cuisine.

Turtle Bay isn’t either. It’s a chain of Caribbean restaurants found as far north as Preston, as far west as Bristol and now as far along the Victoria Line as Walthamstow. 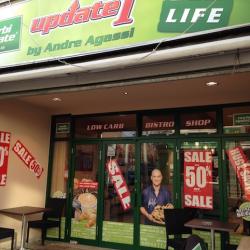 Ah, Walthamstow. A part of London I’ve so far neglected, but from its fans’ reaction on Twitter I really shouldn’t. A high street as long as a beachside promenade, more pound shops than you can spend a tenner in and Andre Agassi serving up low calorie pastries and coffee. Seriously. He’s there. I’ve seen him or at least a cardboard cutout of him. Hard times indeed for a former No. 1 tennis professional. No offence to Walthamstow. 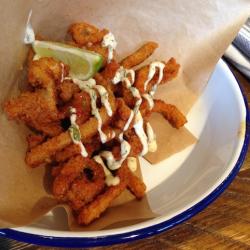 With bottles of lethally-hot sauce sat on every table, Turtle Bay is distinctly more interesting than Pizza Express from minute one. The menu is too, offering a fair range of Caribbean dishes that intrigue a total novice like me.

I had a genuine British-Jamaican on hand, so had some guidance though the menu. The first course, an English favourite of battered chilli squid and a bit more kick than I was expecting, a good dose of squid flavour and far far far too much salt. Half a coke gone within three mouthfuls. 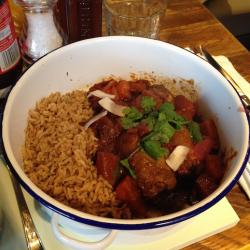 The starter was a hefty portion – as, for some reason, I always expect from a chain – and there was heftier to come. The Jamaican brown chicken was a full pot of rice, chicken stew, the odd vegetable and a side of dumplings to fill any hole remaining.

But, why served in a pot? It hadn’t been cooked in the pot (that was clear from the lack of pot stain – is that a term?) and seemed to add nothing to the eating experience except annoyance when trying to reach the food. Honestly, it wasn’t just me. Everyone seemed to be having trouble diving into their pot with knives and forks. A strange ‘aesthetic’ decision that served no purpose.

The stew was a little on the dull side, but I’ll chalk that down as my fault for ordering the least spicy thing on the menu. The cooking was faultless though. Tender chicken stew, with rice (who ever gets rice wrong?) and dumplings to soak up the juice. 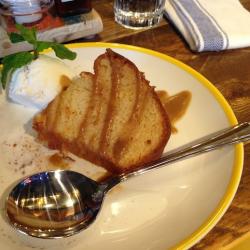 Faultless, but just not exciting and the same went for the pudding. Rum cake. Yep, it’s a cake. Yep, it tastes of rum. Perhaps that’s the sum of it? All that one can expect from a rum cake? I don’t know, but something now makes me determined to find out. I just can’t believe something so plain could become so popular. Then again, couscous is both plain and popular, so what do I know.

Dullness a-side, good luck to Turtle Bay. The experience wasn’t worth a special journey all the way along the Victoria Line, when the heart of Caribbean cooking in London is only minutes away from my front door. However, it’s good to see Caribbean cuisine getting more exposure and were I to live a little closer, there’d surely be another visit to Turtle Bay, with the aim of broadening my horizons and branching out into something with a little more punch.

– Read about Nick’s experience at The Kebab Awards 2014