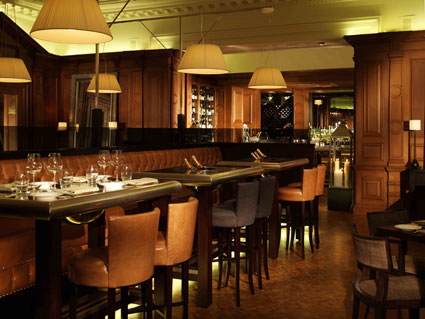 In the wee small hours of the morning I often lie awake worrying that it can’t be easy running a hotel restaurant. The pressure to make sure that every guest has something on the menu they can eat is immense, because God forbid they go outside and spend instead.

At the lovely Landmark Hotel in London the menu upstairs in The Winter Garden is all fine dining, while downstairs the menu at the intimate and rather chic Twotwentytwo has all culinary bases covered. Steaks for Mr Business Traveller? Check. Burgers for the timid eater and the sullen teen? Check. Caesar Salad for the American arriving in his time machine from 1970? Check. There’s even cod and chips and a ‘sharing platter’ of all your vaguely Mediterranean hits like hummus calimari, harissa chicken, parma ham etc. Add to that a range of pastas (everyone likes pasta) and some modern salads and chef can pretty much guarantee a result with every diner.

Tiger prawns often crop up on hotel restaurant menus and all too often turn up on the plate grilled with their shell on. I’ve nothing against a grilled prawn, and I hope they have nothing against me, but I really don’t want to be getting all messy peeling the thing and then have to stare at the disembodied head for the rest of the meal. I ordered it anyway thinking it would reveal something of what chef could do and it did. The tiger prawn salad, with slow roasted red pepper and saffron mayonnaise, featured a generous helping of prawns properly out of their shells. Plus they had been deveined which I find reassuring and which creates a pleasant shape when, as here, they’re accurately cooked off to give that all important hint of charring. Not only that but the plate was well dressed and attractive and the mayonnaise very good. A nice surprise in all.

I stole some meaty slivers from a nearby plate of ‘beef carpaccio with rocket, black truffle oil and freshly shaved parmesan’ and while it could have had the truffle oil throttled back a bit, again it was really rather good with the quality beef not quite dissolving on the tongue, but needing a slight chew to release the deep flavour.

Again, with testing in mind, I ordered the ‘maize fed chicken breast, gratin potato, green beans and wild mushroom sauce’. All the snobs will tell you not to order chicken in a restaurant, unless you’re in Nandos obviously, because chefs sneer at it and can’t be bothered. It’s a sort of baby food for Mr Average they say. Well I like chicken but only if a) it’s on the bone and b) it has crispy skin. Anyone serving a skinless, boneless chicken breast obviously can’t be plucked to cook chicken properly and should be working in a care home where the guests appreciate that sort of thing.

No worries here though; moist flavoursome chicken with a bone proudly sticking out like a leg in a plaster cast, a seasoned crispy skin with the fat rendered well, rather too many, but well-cooked, fine beans, unctuous gratin and a jus that, to be honest, tasted more of wine than mushroom but went great with the gratin anyway. Another down the line decent dish.

And so to dessert. I should have had the warm chocolate fondant with butterscotch ice cream but went for the bramley apple crumble with homemade vanilla custard instead. I must have had a subconscious desire to be comforted. Nothing was wrong with the dish, but it didn’t cuddle me. I suppose an exciting crumble is a bit of an oxymoron really.

And maybe a hotel restaurant is too. Can a place be both? Would you choose a hotel or a restaurant for a meal out? I think in general it would be the latter, but Twotwentytwo has above standard food and cooking at its target level and is well priced too. They could turn down that annoying music a bit though.