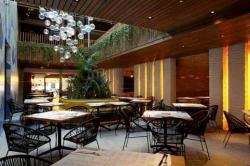 Mexican fast-food joint, Wahaca, has launched the UK’s reportedly first MezcalerÃƒÂ­a  or mezcal bar at its new eighth venture in London’s Charlotte Street. Presuming mezcal may have hallucinatory powers (note to self: that is mescaline), I was over there like a shot. The bar was quite lovely as it was surprisingly quiet for a Friday night, most likely because no one had yet heard of it.

Among the best bits were medieval-design toilets comprising an oak slab into which the toilet bowl is set. However, novel as these are, I foresee ample cleaning challenges, not least the corrosive effect bleach will have on this most natural of rump seats.

A raft of branches was suspended from the bar ceiling, and a couple of swinging birdcage seats for lovebirds were a cute touch. It only being the second week of opening on our visit, there was one teething problem Ã¢â‚¬â€œ the air-con turned on way too high Ã¢â‚¬â€œ but that is easily solved.

We tried a flight of four mezcals which, at 10ml each, only amount to a double spirit measure although the alcohol content is high. All sourced from small-time producers in individual Mexican villages, the idea, said expert Alex, was to show punters that mezcal can be much more complex and inspiring than your average tequila, slammed, with salty lemon down a drunken mouth.

Our favourite mezcal was the Del Maguey Chichicapa, (47.8%) which tasted like juniper berries and mouldering wood. Its heat also spiked your nose in a most pleasant manner. In between tastings, we had a sangrita Ã¢â‚¬â€œ in this case a Ã¢â‚¬Å“little bloodÃ¢â‚¬Â of tomato, Worcester sauce, and fabulously, Asian Maggi seasoning, to wash the palate, which worked well.

Primed with agave nectar, we trooped downstairs into the buzzy, loud hullabaloo of Wahaca’s restaurant. Of the tacos we had, my favourite was the cactus. So the actual cactus itself was a bit insipid, a bit like overboiled green pepper strip, but I don’t know what real cactus tastes like. Topped with the guajillo chilli oil and cheese, this was by far the best.

MSC ceviche, with shrimp and scallops in habanero chilli and lime I could take or leave, ditto with the black bean which, amusingly, was topped by Lancashire cheese, an unnecessary concession really when the tacos seemed mainly Anglicised anyway.

British steak, the Mexican way, was fine, some components being better than others. The green rice looked lovely but didn’t taste of much and was a bit dry but the steaks Ã¢â‚¬â€œ split into four little chunks, were nicely charred. The MSC haddock in a lime and pumpkin seed sauce was a little tame but seemed healthy enough. The portions had been a bit on the small side but that had left room for pudding.

Salted caramel icecream was excellent and pleasantly gritty with salt. The churros, however, were too heavy and came with a lukewarm, gloopy chocolate sauce. Never mind, I was to get the best chocolate fix from the wonderful hot chocolate which, humble though it sounds, tasted fresh and incredible as if shot through with lime. Surprisingly, there was no lime and it was non-dairy, just purely cocoa bean. I’d come here again simply for that. And the bar. Or maybe just a sneak to the lovely loo to see how the cleaners are getting on.