The man with the knives is back, but why do some people seem have the knives out for him? Nick samples Marco Pierre White”s branded Wheeler’s Rib Room and finds it perfectly alright 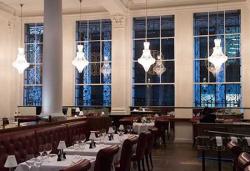 I interviewed the Great White in a restaurant in Lisbon last year, I got lost and was late and expected to cop some flak from the man famous for meltdowns. Instead I found a genial fellow, relaxed and friendly and who waved off my apologies. We all age and MPW seems to have done so rather gracefully.

He expounded back then on his enjoyment of simple cooking after the pressures of his Michelin star years; steak and chips, fish pies’stuff like that’. He wanted such things to be done perfectly and he had no interest in fancy flummery any more. He also intimated that his Marco Pierre White brand was no longer entirely under his control.

So here we are at what used to be Bonds now Wheeler’s. It looks the same but for Bob Carlos Clarke’s fabulous photos of MPW on the wall, photos taken long before digital at a time when calling yourself a photographer meant more than being able to buy a Canon dSLR.

It’s evening, never a busy time for restaurants in this area. Most local workers have gone home or to the hotspots of the west and east, but nonetheless it’s still reasonably busy. The high ceilings of this former bank and its fancy columns remind you that once upon a time banks were akin to cathedrals; you were supposed to feel small when you entered.

The menu here was created by MPW, although of course he isn’t in here cooking it. It’s a list of dishes that used to be staples for City types of the old school; unpretentious, filling, British and a bit pricey. A, who is up from Penzance en route to Lyon, picks a prawn cocktail, something he admits to not having eaten since the 70s. I warn him there is a danger it will be some’rebooted’ aberration containing three king prawns with heads on perched like parrots on the rim of a dish filled with rocket.

I was wrong; it’s a bowl brimming with the right size peeled prawns with a proper Marie Rose sauce tickled with Tabasco. The prawns aren’t tooth-achingly cold; the lettuce is not Iceberg but it is probably Little Gem, which is close enough for both of us. He likes it, I do too. 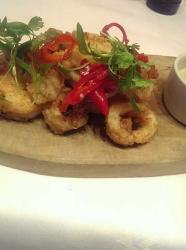 I’ve got a’panache’ of Calamari and Shrimp. Panache in a French bar is a lager shandy so I’m not quite sure what it means here, but the squid is well fried, if not quite as crispy as I’d like, and shards of raw red chilli are gleefully dotted about to add sudden surprise. The tartar sauce lacks some of the oomph I like, I admit I actually prefer the stuff that comes in sachets, and the whole is served on a wooden board, which is a bit passÃƒÂ© now with those that claim to know.

Fish pies and steaks are all very tempting, after all who doesn’t like a fish pie? But I can’t resist the siren song of macaroni of lobster because when you’re in the mood for carbs, fancy pasta always hits the spot. What comes out is’bendy macaroni’, indeed I would debate if it was really macaroni at all but simply another variety of pasta, larger and thicker, which is fine as I am no purist on that score.

The bisque’y sauce has been semi absorbed by the pasta just as it should be and it’s a rich comforting bowlful. The lobster itself is represented by some hunks of meat, which I would have preferred diced up a bit smaller to be spread around and there is a good whiff of tarragon. Simple to eat, easy to enjoy.

A has Grilled Sea Bream ÃƒÂ  la NiÃƒÂ§oise, sauce vierge au basilica, which is quite a mouthful and as it turns out quite a plateful too; a teetering tower of classic nicoise ingredients – tomatoes, black olives, anchovies, French green beans, onions, soft boiled eggs and garlic all topped off with a jaunty hat of pan fried sea bream fillet. This he prods suspiciously to see if it will all topple down and then sets to;’it might have been easier to eat if they’d assembled it the other way up,’ he says between mouthfuls,’but it’s very good, the skin is properly crispy and the eggs slightly warm and runny’.

They don’t do a crÃƒÂ¨me brulee here, but they do a Cambridge Burnt Cream, which has some claim to predate the Gallic version which is, after all, made with crÃƒÂ¨me anglaise.  A’ thought his just about perfect, the topping easily crunchy enough and the crÃƒÂ¨me unctuous.

My Wheeler’s Baked Cheesecake with passion fruit sauce was very acceptable too; the sharp sauce counterpointing the rich cheesecake. A simple dish done well which is the ethos of the restaurant as advertised.

Personally I think those who expect’better’ from MPW miss the point, he simply doesn’t do that kind of food anymore. Wheelers is delivering no more and no less than it says on the tin and in the white heat of the restaurant world that really is no bad thing.