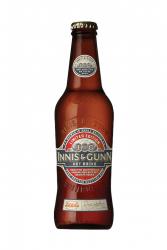 Rooted in the rich brewing heartland of Scotland, Hot Rocks owes its unique name to the brewing process whereby hot granite rocks are used to caramelise the cereals at the heart of this ancient ale, extracting the delicious malt sugars. Innis & Gunn selected the historic bere barley alongside raw barley and malted barley to make Hot Rocks. As hops were not used widely in Britain till the 1500’s, Innis & Gunn has – like ancient man – used none. To remain as true to the original brewing process as possible, sweet gale and meadowsweet have been added for bittering and to preserve the ale, as well as horehound and pink heather, all naturally-occurring botanicals in the British Isles since 4,000 BC. A touch of honey, not commonly used in brewing until Victorian times, lends a soft sweetness. The beer is bottle conditioned to allow it to mature nicelyÃ¢â‚¬Â¦but Innis & Gunn advises not leaving it for another 4,000 years!

Hot Rocks will be available to preorder on Innis & Gunn’s online shop from 23 April for £15 for a 330ml bottle, free shipping. This is a limited edition brew!