It’s been almost a year since I visited the chaotic, crazy, captivating Indian capital and I’m feeling nostalgic. Especially 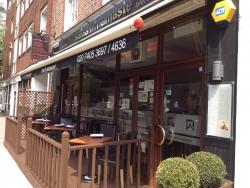 since the Grande Dame of Indian home cooking, Madhur Jaffrey, has just made a rare London appearance at the South Asian Literature Festival, and I wasn’t there to see her. Madhur’s autobiography,’Climbing The Mango Trees’ is full of delectable Delhi reminiscences- home-style chicken stews, the most artisan of breads, and the snack-y treats so beloved of the diverse people of the city that never stops.

So when Sabir Karim decides Delhi is where we’re headed with the latest monthly menu in his year-long regional series, I can’t RSVP fast enough. Salaam Namaste is an unassuming joint in the quiet Bloomsbury backwaters, about as far from the frenetic bustle of Chandni Chowk or Chawri Bazaar as you could conceive. It’s also a smidgen more conducive to a wine-soaked leisurely lunch than the squat-and-gobble street stalls that proliferate in the subcontinent.

North India is known for having a wicked way with meat. Despite large numbers of Hindu vegetarians, the Mughul influence dating back to when the city was known as Shahjahanabad is equally in evidence. Modern Delhi boasts a cosmopolitan cuisine, with foodie residents chowing down on anything from top-end Italian to Chinese noodles. But we’re here for the city’s finest- kicking off with succulent, green-spiced chicken kebabs.

Lamb chops aren’t quite as large or as tender as the Pakistani whoppers you might have encountered at Tayaabs or Lahore, but nonetheless, the combination of the stronger’garam’ spices and the savour of the meat is a winner. The arrival of Amritsar-style Kingfish steaks and grilled prawns tenderised with the fabulously tartness of raw mango rapidly turns the starter course into a Delhi-style surf’n’turf.

Veggies are given a look in- a street-style chaat of chickpea-and-chutney-strewn spiced potato cakes doffs its hat slightly to the fruits of the earth, but mains offer yet more carnivorous pleasures. Dhaba gosht is a well-spiced, simple lamb dish, akin to the humbly tasty stews you’d find at an Indian truckstop. Lamb raan takes its inspiration from that legendary Delhi purveyor of tandoori cooking, Bukhara– the rich shank meat served on the bone rather than the shredded-in-a-bun version proving so popular at the new Dishoom.

Moti Mahal has widely been considered one of the city’s premier Mughlai-style restaurants for over half a century, responsible for the creation of the luxurious butter chicken now loved everywhere from Delhi to the curryhouses of Dundee. Salaam Namaste‘s is rich and sweet as a dish fit for kings should rightfully be, a fitting ointment for buttery, tender naan like that which first appeared in the Imperial Court in 1300AD.

Paneer is a meek ingredient, celebrated for both its clean purity and ability to take on myriad flavours. The whole spices used alongside red chilli in the Kharey Masaley imbue it with a pickle-like flavour, cutting through the riches of the heavier preparations. The Mughals were also responsible for the introduction of the’Yakhni’ technique- cooking in stock, and our pilau has benefitted from a highly savoury immersion.

It would be ludicrous to pay a visit- in reality or vicariously- to Delhi and not make the pilgrimage to Parathe Wali Gali- the avenue so well-known for its breads it’s named for them. Although savoury versions are better known in England, most people are familiar with the coconut-and-fruit filling of a Peshwari naan- testament to the pairing of soft, savoury dough and sweet, sticky filling. Here, rabri-a highly reduced milk grainy with tiny milk solids and redolent with saffron, cloaks wedges of wheaty paratha.

It’s a tasty end and fitting euphemism for Delhi itself- a city of contrasts; the old and the new; the sweet and the bitter; the madness and the majesty. It’s a place that gets under your skin and stays with you, that asserts its memory in the most unlikely of circumstances. And here, in those quiet Bloomsbury backwaters, Salaam Namaste‘s regional menu has managed to evoke the metropolis.

The Delhi menu is available from Salaam Namaste (68 Millman Street, WC1N 3EF) and its sister venue Namaaste Kitchen (64 Parkway, NW1 7AH) throughout October. For more information and to book, visit www.salaam-namaste.co.uk and www.namaastekitchen.co.uk