Pigs and parmesan aren’t enough for the people of Emilia Romagna, Italy, they want to have their art and eat it too. Nick Harman heads out to sample a bit of both. 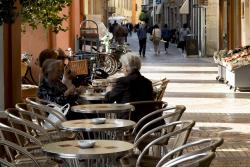 Ã¢â‚¬ËœI’m going to London tomorrow.’ enthuses the Italian man at Due Platani , a trattoria in the countryside just outside Parma,’I’ve got a reservation at Chiltern Firehouse after three months’ wait!’ Well you don’t want to be a downer on anyone do you, but I had to bite back a’why bother?’ I mean I had just eaten a superb meal of local, seasonal produce such as pumpkin ravioli, so good other chefs come for miles to eat them, in a room joyfully filled with people of all ages and with not a WAG or scenester in sight. 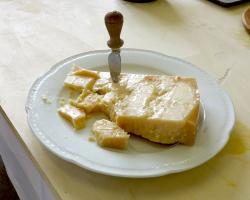 It was followed by pasta ribbons mixed with a perfect balance of duck ragu, enough to add flavour to the fresh pasta but not swamp it, then some guinea fowl with spicy sweet mostarda, and had ended with my being invited to see a huge mound of fresh ice cream come surging out of an ancient gelato machine before it was rushed to eagerly waiting tables. You don’t get that in West London. 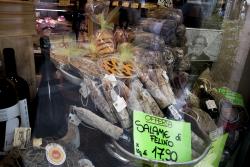 They call Bologna, the capital of this north-west region of Italy, La Grassa or’The Fat’ and a love of food that’s remarkable even by Italian standards runs deep throughout the area. The’fat’ doesn’t just refer to waistlines it also refers to the local preference for butter over olive oil; every dish seems to have a butter element, whether drizzled over pasta or used to cook the meat and fish. 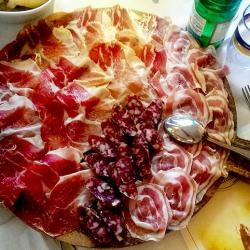 And everywhere pork is venerated, worshipped, argued over and consumed in vast quantities. Every meal seems to start with a giant plateful of meats gathered from all around such as Coppa Piacentina from the Arda Valley, a treat made from the forequarters of the pig and justly awarded DOP (Protected Denomination of Origin). It’s served alongside sweet Prosciutto de Parma and a Culatello di Zibello that’s absorbed the character of the region from its slow aging in rooms with windows open to the soft air and autumn mists coming off the River Po. 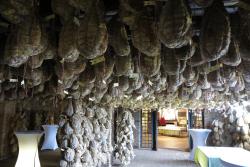 Culatello creation is an art demonstrated to me at Podere Cadassa. A cookery school and a restaurant it makes its own Culatello which are aged in’caves’ under the floors. They hang in their hundreds, if not thousands, like porky bats and I bump my head on them as I find my way to the demo kitchen to be shown how to make a dozen different pasta dishes. The eggs I use are so golden-yolked they dazzle.’The chickens eat a lot of carrots,’ says chef by way of explanation and I don’t know if he’s joking but I don’t ask.

And then with appetite at defcon 1 I eat in his restaurant hugely and well, tucking into platters of all those meats before eating a bowl of beef broth where Anolini, (called anvein in the local dialect); small stuffed pasta saucers unique to the region, bob cheerfully and are washed down with some robust Sangiovese red and some cheerfully sparkling Lambrusco. 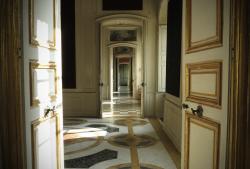 Stuffed I think it’s time for some culture, so I wobble out for the short drive to the Colorno Palace. The region is studded with grand palaces and dotted with stunningly beautiful small fortified hilltop towns, but this palace is extra special. 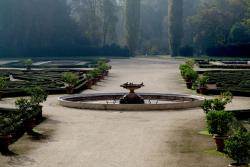 Built by Francesco Farnese, Duke of Parma in the early 18th century, it is enormous and totally empty its endless grand rooms, designed to remind Princess Louise Ãƒâ€°lisabeth of France of her beloved Versailles, were stripped of everything but the paint on the walls long ago and it was, until 1976, used as a mental hospital and is chilling and fascinating at the same time. The gardens, now a shadow of their original size are still charming as is the church within the palace walls. 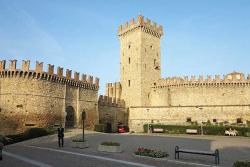 Another beautiful spot not far away is tiny hilltop town of Vigoleno where I meet the mayor, the locals number around twenty in total and all live within the medieval walls where there is also a boutique hotel inside the old castle. 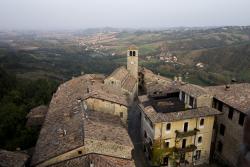 Nearby is a museum dedicated to the strolling players of the region which is a bit gruesome but interesting and I try a tasting of the local Vinsanto wine, which is rich and similar to Madeira. The view from the top of the tower, that once gave early-warning of approaching trouble, is quite breathtaking but then after the long ascent I have no breath left anyway. A climb best tackled before lunch, is my advice.

Night on the town 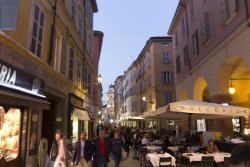 Saturday night in Reggio Emilia is party night; the semi pedestrianised mediaeval streets are thronged with Italian youth. Half the boys are wearing their baseball caps on backwards and making gun shapes with their hands, while the rest are sporting gravity defying hairdos that would make even One Direction feel embarrassed. They preen and ponce about, revelling in the admiring glances of the pretty girls and I slide past feeling even older than usual toward a simple restaurant, La Morina. 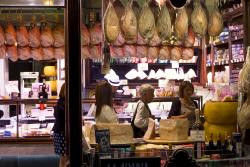 Here, after the usual meat feast as well as a herb stuffed focaccia, they serve rabbit with spinach and some simple fried potatoes followed by rolled and stuffed veal. It’s simple Italian cooking that relies on quality ingredients not fancy cooking and is excellent. Nothing left to do but go to the theatre, the Teatro MunicipaleÃ‚Â which despite its name is no concrete mess but a gorgeous neo classic wedding cake of gilded booths. 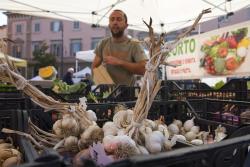 Next day it’s time to visit Piacenza and Parma, both cities of great charm with museums, art galleries, ancient streets and bustling markets to spare. In Parma I had to see the Teatro Farnese in the Pilotta Palace, an impossibly giant baroque theatre built almost entirely of wood in around 1618 and lovingly reconstructed after its virtual destruction in WW2.Ã‚Â 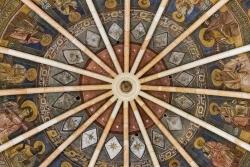 In Parma there is also the hexagonal Baptistery of Parma, built in the 12th century which soars up from its central font, to a painted ceiling of stunning colour and beauty. Next door is the equally impressive church of San Giovanni Evangelista, parts of which go back to the 10th century. 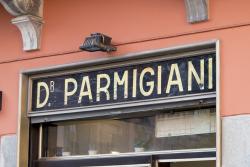 My attention is caught outside by a shop with the sign Dr Parmigiani, surely the best doctor anyone could wish for. 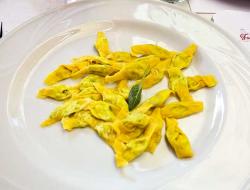 A few days are soon lost and a regretful last lunch is taken at the roadside restaurant Da Faccini near the Castell’Arquato.The sun’s still warm in October so I sit outside to enjoy more meats, an exquisite soup of pumpkin and cepe mushrooms perfectly in season, and a plate of’caramelle’ dressed in sage butter. Caramelle are tubes of pasta filled with ricotta and spinach with the ends twisted so that they resemble sweets. Again the simplicity is striking and the flavour sublime. 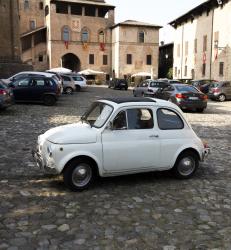 And so to the airport with a case weighed down by Parmesan and slick with hams. This region of Italy has so much to offer the food and art tourist that it should be on everyone’s itinerary, a place where no one watches your waistline.

Our visit was beautifully hosted and organised by Art Cities of Emilia Romagna Region Tourist Board.

Ã‚Â·Prices at Hotel Posta start from approx. Ã‚Â£83 per night based on two people sharing a double room on a bed and breakfast basis.www.hotelposta.re.it

Prices at Hotel Palace Maria Luigia start from approx. Ã‚Â£102 per night based on two people sharing a double room on a bed and breakfast basis. www.palacemarialuigia.com