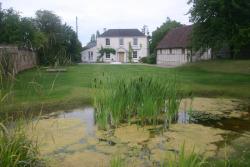 This farm doesn’t look like the setting for revolution. There is a woodpecker on a huge bird feeder, beautiful lawns and old barns, a duck pond, rare geese chattering together and trees that hang green and lazy over the front door. At the back of the barn there is an immaculate allotment where we spot carrots, beetroots, herbs and other vegetables. Chickens are just beginning to drift into their coops for the night, and now and then, the sound of cow hooves tapping on dry mud in the fields.

But this idyllic property in Gloucester isn’t just a pretty farm. It is the home of Charles Martell, who is what I would call a food fighter. He is a quiet, well-spoken and turned out man, profoundly passionate and extremely humble about what he has done. But there’s no getting away from the facts; in 1972, with Old Gloucester cows on the brink of extinction (there were just 68 left) he bought a bull and three cows and started producing Double and Single Gloucester Cheese. Later, he began making the now famous Stinking Bishop, a cheese washed in Perry, an alcoholic drink made from fermented pears. In 2005 it was mentioned by those most British of animated characters, Wallace and Gromit in Curse of the Were Rabbit and the story reached a world stage. 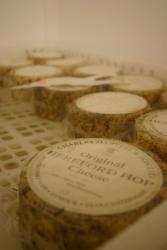 Today, Charles and his team make seven different cheeses, four hard – Double Gloucester, Single Gloucester, Double Berkeley and Hereford Hop – and three soft – the Stinking Bishop, Mayhill Green and Nuns of Caen as well as ciders and perries. I’m slightly disappointed by the characterless cheese production, sterile with its clean, metal equipment, instead of a rough and ready barn, but I could hardly have expected anything else in this day and age.

And even after the cheeses, ciders, perries and, most recently, a pear spirit from the immensely impressive new distillery, Charles hasn’t stopped his work. As we walk around the farm with Garry Hollihead, executive head chef at the beautiful new Corinthia Hotel, who uses the cheeses made here and which are distributed by La Cave à Fromage, Charles shows us the cows, pigs, and pear and Gloucestershire apple trees, many at serious risk of extinction, that he has started growing on his land. He has painstakingly researched and recorded each variety and has spoken to older locals who remember rare breeds. Ashmead’s Kernel, a Gloucester variety, is meant to be one of the best tasting in the world and is also grown here. 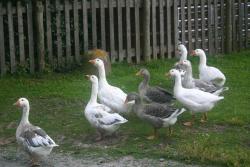 ‘All my friends said they wanted to go to London, come back and get a farm, but I wanted to do that straight away,” he says, and that passion, even 40 years on, still shows. Despite his humbleness – at one point he says ‘I don’t really know why you’re interested in seeing what we do here, all we do is make a few cheeses” – it’s difficult to escape the thought that this work is immeasurably important and were it not for people like Charles, a man who clearly values a British food heritage we were once close to losing, it could simply vanish.

Earlier in the day, and about an hour from Charles’s farm in Hunts Court, Dymock, we were in Monmouth, south Wales. Here, at Trealy Farm, there’s a revolution of a different kind. In yet another faceless barn, good things are happening to meats which are spiced, smoked and fermented.

Garry, who champions British produce in his role as Executive Head Chef at the Corinthia, uses the hams produced here for his British charcuterie board. We try a selection, of which the coppa, traditionally an Italian ham made from the neck, and, a recent addition to their offerings, hogget, an older sheep, are my favourites. However we also try excellent chorizo, salami and a superb spicy black pudding unlike anything I’ve had before. 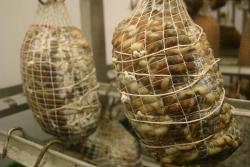 James Swift, co-founder of Trealy Farm Charcuterie, is no stranger to the foodie big time. Last year the company hoovered up awards including winning Best UK Food Producer in the Observer Food Awards. And it’s not hard to see why. Despite the surroundings, the final product is outstanding, and easily comparable to some of those produced across the Channel. Made from rare breeds including Gloucester Old Spot and Saddlebacks, the meat quality is melt-in-the-mouth delicious.

With a French mother, you could perhaps say it was already in James’ blood, but then that wouldn’t be giving him the credit he and his staff deserve for all their efforts in establishing Trealy Farm.

‘We’ve magpied techniques and spices from everywhere but not used one recipe from anywhere. I’m always fiddling around so all the recipes are my own, just trying different combinations,” he says; ‘You go to Spain and they say, ‘We’ve always done it this way,’ but you then discover they are doing it at a particular time of year and at a particular temperature, it’s possible to get a lot of diversity, you have different microflora halfway up a hill than you do at the top and that all affects the final flavour, so there are a lot of variables along the way.”

La Cave à Fromage specialises in primarily British and French cheeses, including Stinking Bishop. For more information log on to www.la-cave.co.uk or call 0845 1088222