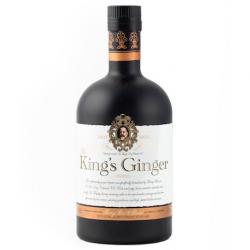 The King’s Ginger, the emphatically ginger liqueur that was specifically formulated by Berry Bros. in 1903 for King Edward VII, has been awarded a Gold Medal at the Asian Spritis Masters run by The Spirits Business.

Rich and zesty, The King’s Ginger was created to stimulate and revivify His Majesty and has been appreciated by bon viveurs, sporting gentlemen and high-spirited ladies ever since.

Luke Tegner, Brands Director at Berry Bros. & Rudd Spirits, states; Ã¢â‚¬Å“This award goes to show that, even at well over 100 years of age, The King’s Ginger is still a truly opulent liqueur.Ã¢â‚¬Â

The King’s Gingeris a high-strength liqueur created by the careful maceration of ginger root enlivened by the judicious addition of citrus in the form of lemon peel. Although warming and heartening on a cold day as originally intended, it is a splendidly uplifting tonic to be enjoyed on its own all year round as well as in any number of cocktails and long drinks.