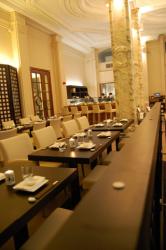 Have you been to Watatsumi? It’s a bit fishy in there.

No, not in that “there’s something suspicious going on” sort of way but rather, they’re a bit fish obsessed.

You see I was recently invited to an evening of cocktail making at Watatsumi, the high-end Japanese restaurant at The Club Quarters Hotel. It was a great opportunity to hone my cocktail making skills, try a few drinks inspired by Japanese food and sample some of the seafood on their extensive menu.

The informal masterclass was held at the bar on a quiet Tuesday evening. You knew it was informal because there were guests sitting on the other end of the bar listening in – but that’s great because it means they’re not afraid to show off their skills. Unfortunately the same couldn’t be said for the participants – I know I made more than a few mistakes! But more on that later.

We started off with a Momji – a champagne cocktail made with Midori, rose liquer, Campari, Momiji (a spicy vegetable paste made with daikon) and of course champagne. One lucky volunteer, Tania, went behind the bar to start us off.

First, you shake up 15ml of the Midori, rose liquer and Campari with half a bar-spoon of Momiji in an ice filled cocktail shaker. Then, after double straining into a champagne flute, you top up the glass with champagne. To create a tiered effect, you need to pour in the champagne gently and it’s best achieved with a swizzle stick that has a perpendicular base. To finish, slip in a few shreds of cucumber and daikon. Et voilà, a champagne cocktail with an unexpected kick. We were having some salmon maki rolls and that kick matched rather well with the wasabi.

I started browsing through the drinks menu to find out exactly what we were drinking and to see what else was available. But alas, all the cocktails we were making were new additions to the menu so I couldn’t find them in print, yet. But I did spot shoals of fish swimming happily around the sake list and darting between the pages to the wines.

The second cocktail of the evening was a Shiso martini. We were introduced to another new ingredient – the Shiso leaf. It’s like a mint but bigger, thinner and more delicate in aroma. Unfortunately that also makes transportation and storage a nightmare and consequently this means a reflection in the price.

For this second cocktail, Amy was the volunteer. And to make it, you measure out 50ml of Disaronno, 20ml of yuzu juice and 25ml of sake into an ice filled cocktail shaker. If you haven’t come across yuzu before, it’s an aromatic citrus fruit found in Asia that tastes like a cross between orange, grapefruit and lemon. Then you take two Shiso leaves and slap them in the palm of your hand to bruise them slightly, thereby releasing their aroma, before adding them into the cocktail shaker as well. Give the whole thing a good shake before double straining the contents into a martini glass. It’s very refreshing with the calamari. 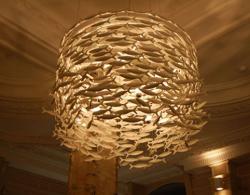 I tried to avoid being chosen for the final cocktail by admiring the lights. And it was very impressive too – a school of fish swimming around the light casting fish shadows across the room and when it’s quiet enough, create a wind chime effect. But it was no use. The final cocktail of the evening was made by yours truly and it was a Japanese mojito.

Having had many a mojitos in my time, I was off trying to add double shots of rum to my glass. Then of course I spilled the sake everywhere. In reality however, you should be muddling four Shiso leaves with some sugar, 20ml yuzu juice, 25ml rum, and 50ml sake in a glass filled with crushed ice. Top with more ice after the muddling and a splash of Chambord to serve. Mine was a little strong but that’s ok, it tasted pretty good.

Cocktails made, drinks had and dinner consumed – it was time to head off. But not before one last one for the road – a shot of lychee liqueur with ice cream covered in glutinous rice. Hic.