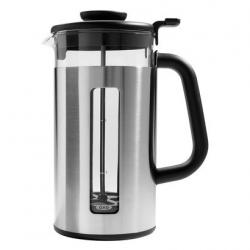 French Press sounds like a wrestling move, or something worse, but is in fact how our American friends refer to the device we call a cafetiere. Because, presumably, you press down on the plunger.

The Cafetiere, or whatever you want to call it, revolutionised home coffee making and almost overnight took over from the percolator and that annoying thing with the paper filter. It was almost as quick as instant and could be carried proudly to the table  at the then popular dinner parties. It seemed perfect in every way, until that is you came to clean the thing.

You could tip the jar into the bin, and that got rid of most of the grounds, but then you had to wash out the rest of it and tiny specks of coffee grounds went everywhere, tenaciously clinging to every surface. If you had a white sink it sent you into a rage. And coffee down the sink invariably leads to blockages.

So Oxo have thought about this and come up with the Oxo Good Grips 4-Cup French Press. Good grips is a range from Oxo which, as the name suggests, give you a good handful. In this case the main handle is a rubber-like substance that feels firm and solid in use. And when you’re carrying hot coffee, that’s a reassuring feeling.

The extra clever bit though is that it has a device called a GroundsKeeper. This is a silicon platform on which the coffee rests and that can be drawn straight up and out when it’s time to clean. Hardly a single grain of the grounds escape and so you can dump the lot into your organic wastebin with ease. The Groundskeeper also has measuring marks to help you load the correct amount of coffee in the first place. The filter on the plunger is good and fine, keeping the grounds on the bottom and not swirling around your coffee cup.

Add to that a brushed stainless steel housing to make the whole thing shiny, and you have a rather classy cafetiere. Some grounds do inevitably escape, the ones that are really tiny, and the plunger seems a little flimsy but overall it’s an improvement on a classic piece of kit. Do you fancy a French Press? Well, if you’re over 18 why not?