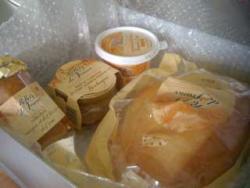 I’ll be honest. I’m reviewing this new Ocado range because at the moment I’m on the famine side of feast or famine – the downside to being freelance – and since the ‘feasts” have in truth been famines, it seemed the only real feast I’d ever get was the offer of some French picnic goodies. Bread, cheese and jam. How easily I am bought.

So there I was sitting at home in a state of despondency, plotting life forks, barely suppressing anger at another tranche of substandard shrivelled vegetables ethically bought from the unethical local greengrocer… And I got an email asking if I’d review Reflets de France stuff. And – get this – they’d send it to my home as I sat here watching David Dickinson’s Real Deal! Just like the real Ocado with their dinky vans that I so covet.

As I was musing the price of another 19th century snuff-box, the crate came. First out was the cancoillotte with garlic that costs £2.99, a kind of tacky, runny, soft cheese spread, a mix between a cream consistency and melted cheese with a hint of garlic. Amazingly the whole tub apparently contains only 8% total fat! Must say, at room temperature, this was very tasty. I slathered some on the Gache brioche loaf, again- £2.99.

The blurb says the origins of the Gache brioche loaf date back to the Middle Ages. It was customary for families to bake this type of cake for special celebrations. It was a tiny bit dry but not adversely so and made a good accompaniment to my favourite orange and clementine jam – this uses Corsican oranges and has big candied strips of rind floating about which were thrilling, I loved this.

I also had some free-range coarse pork paté from Brittany, a rough Pate de Campagne which originally, in the Middle Ages, was apparently ‘made in a crust”.Ã¢â‚¬Â¨This ‘mincemeat” was cooked in pots and while the pastry disappeared, the paté remained. This little pot had chunky bits of meat and white fat batting around, a bit too greasy for me though. Anyway, after this most welcome stuffing, David Dickinson and his tan were finished. Come Dine with Me, anyone?