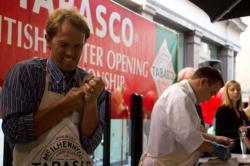 The annual Tabasco Oyster Opening Championships 2012 brings together some of the biggest’oyster men’ from across the country to challenge each other’s skill and great expertise. Sukruti Staneley takes her camera to catch the action.

When I saw the massive Tabasco bottle strut through Swallow Street in Soho Ã¢â‚¬â€œ I knew this was the beginning of what was going to be an fantastic evening. The Indian summer showed face and champagne flutes merrily clinked in tune to the bright and jazzy trio. The quiet afternoon gently slipped into a busy shuffle of animated faces and soft slurps. 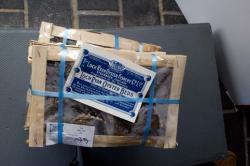 The annual Tabasco Oyster Opening Championships 2012, marks the beginning of the oyster season in the United Kingdom. This event brings together some of the biggest’oyster men’ from across the country to challenge each other’s skill and great expertise. This year, Bentley’s Oyster Bar & Grill Ã¢â‚¬â€œ located in Central London was abuzz with curious passer-bys, spirited supporters and the odd bunches of metallic red and green balloons. 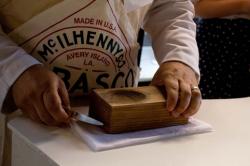 The championship is defined by a contender’s speed and presentation. His skills require him to shuck 30 oysters, with great perfection. The men knife their way into the shell and must carefully cut it open without damaging the oyster. Each of the’oyster men’ have their own tables, fully equipped with tray and bell. The bells are unique to each table and similarly so are their users. 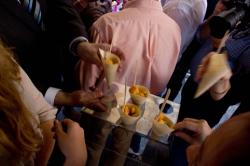 While some dive in fearlessly without professional chain mesh gloves, others use wooden oyster boards to reach high standards of shucking. The oysters must then be well presented Ã¢â‚¬â€œ all thirty of them. While the men tirelessly strive to shuck a whole box of oysters, the guests taste and enjoy fresh oysters on silver trays with infused lemon and glasses of champagne. Mini gourmet burgers floated through the crowd and thin wooden cones filled with scotch eggs are generously served. 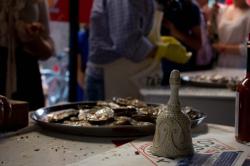 The 19th Century saw the growth in the consumption of oysters by the middle class Ã¢â‚¬â€œ they were easily available and not exquisite as we may see them today. Baguettes filled with oysters used to be as common as ham and cheese rolls today, however over time they began to vanish due to pollution and exhaustion of oyster beds. 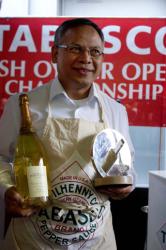 Now, this delicacy is rare and a treat Ã¢â‚¬â€œ its versatility of consumption has made it popular amongst different cuisines and has found its way to a variegated sense of taste and flavour. For this contest, the native oysters came from Scotland Ã¢â‚¬â€œ the Loch Ryan Oyster Fishery co. The art and skill of oyster shucking involves persistence and perfection, men strived to win the title and carry on to the international oyster opening championship in Galway later this year.

Sam Tamsanguan of Wilton’s restaurant has been an’oyster man’ for 30 years now, in 1975 he held an oyster for the first time and now declared the winner of the Tabasco Oyster Opening Championship. With speed and precision he managed to shuck all 30 oysters and present them with excellence. 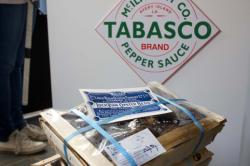 Followed by Filippo from Bentley’s who was incredibly meticulous and a’star shucker’ in his own home ground. The long-term champion – Fredrik Lindfors came in fourth and was a treat to watch. The celebrity round was won by Richard Corrigan Ã¢â‚¬â€œ owner of the Bentley’s Oyster Bar & Grill.

Amidst all the slipping and shucking, the street was alive and the jazzy rhythms carried the evening on into a delightful victory with more celebratory champagne and oysters, of course.