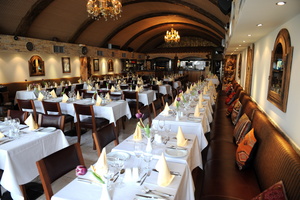 A stone’s throw from Vauxhall Cross (where our secret service hang out) Nar Restaurant and Bar sits on the Albert Embankment occupying the space created by two of the arches on which the trains to and from Waterloo station serve the west on London and beyond. I was invited to attend its official launch party recently and of course was happy to do so. The restaurant and bar areas are substantial, and have interesting design features, the arched ceilings decorated with a bamboo and metallic effect covering that accentuates the length of each of the two spaces, the floor tiling is impressive as is that to the walls, clearly a lot of care has gone into the creation of these two linked spaces. Middle eastern style artefacts are used in dressing both the restaurant and bar. In the restaurant side the grill and kitchen area on show at the far end from the entrance so you are able to see chefs at work while you sit and enjoy your meal.

On arrival we were greeted with a selection of soft drinks, and wines to choose from, including Champagne, and no prizes for guessing what I chose! The waiting staff seemed to be pouring drinks endlessly, we were all very well looked after. During the evening, a buffet was set out in the restaurant half. This was comprised, of a range of dishes from Nar’s menu, which is largely focussed on Turkish cuisine but includes a good selection of Italian pasta dishes, risottos and pizza. Our buffet allowed those present to sample a number of these, including: lovely creamy Humus, which had great flavour; fresh tasting thick creamy Cacik (like a tzatziki); very good, tasty lamb kofte; skewers of tender chicken, which had great flavour from its marinade; stuffed vine leaves that had a nice tang; Klymall Borek (nicely seasoned lamb parcels) and some crunchy falafel that had a freshness from the coriander in the mix. All good stuff, and as you might imagine after these I was feeling a little full. However, a little later I was offered a slice of the Nar house pizza, topped with chicken, mushroom and onion, how could I resist? Let me tell you, I wasn’t disappointed, it was very good.

If the food that we sampled and the atmosphere created is typical of what one might expect from a visit to Nar, it is well worth trying. You can find Nar at www.narrestaurant.com take a look.
akandpa