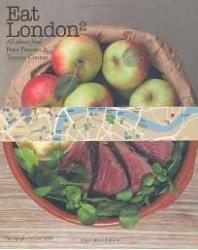 It’s not of course the authors’ fault that this book became out of date even before they got it printed. Such is the speed of restaurants opening and closing in London nothing but online or an app could ever hope to be current.

Almost the first restaurant featured is Petersham Nurseries and much is made of the woman who made it famous; Skye Gyngell. She has since left and Greg Malouf is in charge, a different menu entirely. You won’t find current centres of mania such as Pitt Cue or 10 Greek Street either,

This is in some ways a good thing as the restaurants featured that are still around, are around for a reason, consistency. If you want a guaranteed decent meal then this book is a reliable guide, if not an infallible one.

This is the second edition and has 300 restaurants, cafes, markets and artisan stores featured. Many will be new to readers not local to the particular areas and, if you first check online that they still exist, well worth an expedition to. The authors’ London is considerably bigger than most restaurant critics’ and so we all can find something not too far away. They don’t go past Brixton heading south on the Brighton Road, which is a personal disappointment, but to be fair it’s mostly jerk chicken and Polish food as suits the demographic.

Each section of postcodes has an introduction that makes similar generalisations to mine, and like all generalisations they are pretty much the truth. They have Terence Conran’s stamp on them as think pieces, the rather grand and starchy style of writing.

He and co-author Peter Prescott are fair about the chain restaurants when they see merit; they don’t go in for the knee-jerk rejection less-experienced eaters tend to do. Credit is given where credit is due and nor do they bow to popular opinion, possibly because it’s unlikely either of them use Twitter that much and so can make their own minds up. They describe some of wunderkind chef Nuno Mendes’ dishes as ‘wonderful’ and some as ‘horrible’, the experience of this writer too, but on Twitter Nuno can do no wrong.

You don’t have to trust their opinions of course, but the general overviews are objective and so useful. The wealth of pictures helps tell the story and there are over 60 recipes from selected chefs that quite justify the book’s price on their own.

As a cookbook, a reference book and a book to argue the toss over, Eat London 2 does a pretty good job. No doubt they are frantically now editing to bring out number 3.