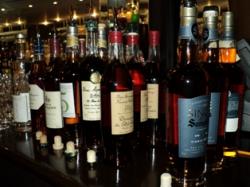 When invited to an event, celebrating 700 years of Armagnac production, I thought how bizarre – well who wouldn’t when the theme was pairing Armagnac with Indian cuisine from the Moghul region in the north west of India? It was absolutely an invitation I wasn’t going to turn down and I was glad I didn’t.

Invited guests arrived at Alfred Prasad’s Michelin starred Tamarind restaurant, in Mayfair’s Queen Street, to be greeted with a very pleasant White Rose cocktail, a little sweet for me, but I drank it nevertheless, it’s only polite after all. As we were seated, there were two different Armagnac pours at each setting for us to taste with the first platter of canapés. From that point, I knew it might be a dangerous afternoon. 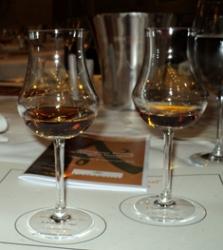 In all we tasted seven different Armagnacs with some eleven canapés and it was an interesting experiment, putting together complex spirits, each generally seen as a digestife with these spicy little mouthfuls. Some of these worked well, the canapés softening the slight peppery heat that many of the Armagnacs have, others not so well. There was, for example the Marquis de Montesquiou, Cuvee Louis Premiere, a bold fruity Armagnac, with some initial peppery heat, vanilla and a sweetness, its pepperiness reduced having taken a bite of the spicy offerings, but did it work? Probably not, this is an excellent Armagnac that should be enjoyed for what it is. Another that I felt should be served as an after dinner drink was the Tariquet 15 year old which had a syrupy feel on the palate and some spice to it. There were two softer, perhaps lighter Armagnacs, the Castarede XO 20 year old with its soft floral notes and smoothness and the Samalens 15 year old, with its soft delicate sweetness, served with the ‘dessert’ canapés did somehow come together well with the food, the sweetness of the bites undoubtedly the reason for this.

Others that we sampled with the food were the Baron de Sigognac 10 year old, which has a fruity peppery spiciness and a sweetness, the Delord 25 year old – a deeply coloured Armagnac, that is sweet soft and peppery with vanilla notes and the Darroze Domaine Petit Lassis 1973, which had pepper, fruity sweetness. All of these make excellent after dinner drinks and if you haven’t tried Armagnac, I would urge you to do so. Its not been in production for 700 years for no reason.

So, the purpose of the event was to see whether these two artisan products – Armagnac and regional Indian cuisine worked well together. All I would say is, personally, I wouldn’t chose to drink Armagnac as an accompaniment to Indian cuisine, however good it is, except perhaps with a dessert. But then, I wouldn’t choose to drink it throughout any meal. These artisan creations should be enjoyed for what they are, savouring the complexity of each, after all, they weren’t created to have to compete with bold dishes, were they?

For more information about Armagnac, go to www.armagnac.fr