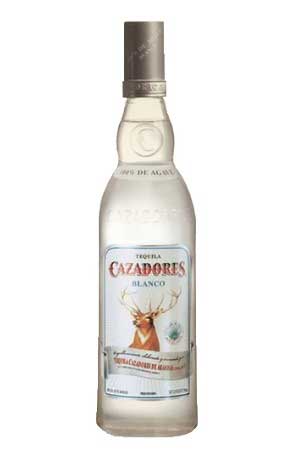 Tequila doesn’t have a great rep in this country. Tequila slammers etc being things that people determined to spend a night in A&E like to drink. Even the name is tricky; no one seems to be able to say tequila without shouting it in a Speedy Gonzales accent. It’s a shame that the national drink of Mexico has been reduced to being shorthand for inner city drunkeness and young women walking about in micro skirts long after the snow on the ground has risen past their be-chained ankles.

Now I like a bit of spirit – I go gaga over good Grappa, I salivate at single malts, I run out of alliteration at this point, but you see what I mean. When I have had tequila I too have done the salt on the hand thing, the piece of lime and all that malarkey. I’ve never actually tasted the stuff properly though.

So spotting a bottle of Cazadores tequila on the shop shelf with a picture of a deer on it I was intrigued. Surely you don’t get deer in Mexico? Maybe this was an old bottle of scotch that had been recycled? It is in fact because this premium tequila is distilled from highlands of Jalisco, Mexico where the ripest and sweetest blue Agave grows and Cazadores uses only 100% of that agave. The highlands of this region are famous for their deer and Cazadore means ‘hunter’. In the Los Altos region of Jalisco, 500-metres above the Tequila valley, the climate is cooler and wetter and the distinctive red soil is rich in minerals. This Highland terroir creates the ideal growing conditions for agave which are larger, sweeter and juicier

Sipping it you get to understand why it is so famous in its homeland. Cazadores has three products in its range: the youthful, un-aged Blanco; the Reposado which is rested for a minimum of 3 months; and the eldest of the trio, the Añejo, which is aged for a minimum of 12 months. Ageing takes place in American oak barrels. The Blanco, the one in front of me, had a wonderful fruity, cinnamon, aroma when wafted under my nose (never stick your beak in a glass of spirits as you would do wine, you will yelp with nasal pain).On the palate it was floral, spicy, not too sweet and with a reasonably pronounced agave taste and a bit of a burn on finish.

Since that first sip I have been steadfastly refusing guests exhortations to stick it in a cocktail – it seems to good for that. However if you are that way inclined and like a little umbrella and a load of fruit in your drinks, the Cazadores ambassadors suggest some cocktails below. Find out more at www.cazadores.com

mix 1 litre tomato juice, 150ml lime juice, 150ml orange juice, a handful of sea salt, and handful of black pepper, Cholula hot sauce to taste and a 50ml measure of Cazadores Anejo. This batch will be enough for approximately 50 Sangrita shots, served with your preferred style of Cazadores.

The classic tequila cocktail and Cazadores recommends a luxurious version made with 50ml Cazadores Reposado, 25ml fresh lime juice, 15ml Cointreau and 10ml Agave syrup – shaken and served either on the rocks or straight up. The Cazadores Margarita is best savoured without a salt rim.

One of the simplest and most authentic Mexican drinks. Made with 50ml Cazadores Blanco, 15ml fresh lime juice and topped up with a sparkling grapefruit mixer. Ting is great, but this can be substituted with fresh grapefruit juice and soda. It is served long over ice with a wedge of pink grapefruit in a salt-rimmed glass.

The winning cocktail in the Cazadores Hunt 2008. Created by Mattieus Lattalle, bar manager of Green & Red it mixes 40ml Cazadores Reposado with 50ml pomegranate juice, 15ml freshly squeezed lime juice, topped with lemonade and a dash of orange bitters. It is served long over ice in a salt-rimmed glass with a squeezed lime wedge.