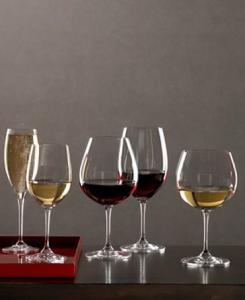 Most people know you should use certain wine glasses for certain wines, but what us non-wine experts might not have realised is just how much the shape of a glass affects the taste and aroma of wine.

Glass manufacturers Reidel have known about this since way back in 1961 and ever since they’ve been enlightening wine drinkers the world over with their wine specific glassware.

Each glass in Reidel’s extensive range is designed as a vessel for a particular grape variety. By working in collaboration with wine producers to create a unique glass that shows off the grower’s wine to maximum effect, Reidel are able to bring out flavours that are often lost when the wine is drunk from a generic glass.

Ever the realists over at Reidel HQ, they say “Despite rave reviews from both professional critics and ordinary drinkers, startled at just how much difference the right glass can make, initial scepticism seems only natural. Until you have had the chance to try it for yourself, the idea that a glass can balance the tannin in a rich Cabernet Sauvignon or highlight the freshness in a Chardonnay, seems implausible. But that is precisely what generations of drinkers have discovered, and it’s not something Riedel are afraid of having you try for yourself – the revelation will change the way you drink.”

When I went to Reidel’s wine and comparative glass tasting at Vinopolis, I did indeed see (and taste) the difference for myself and I’ve been raving about it ever since.

CEO of Reidel Crystal Maximillian Riedel led us through a procession of wines and instructed us to pour them into the five different glasses on the table, one of which was a plastic beaker. He explained that Reidel’s glasses “take advantage of the fact that the tongue has distinct sectors for detecting flavours (sweetness towards the front, bitterness towards the back, for example). We put immense effort into getting exactly the right shape to the glass to ensure the drink is delivered to the right areas of the mouth.” 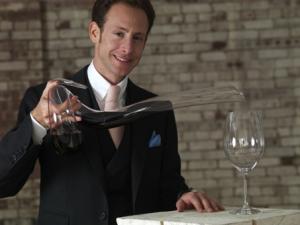 As the other people swilled and spat, I gave myself time to taste the intricacies of the flavour in each glass and I couldn’t deny that the glasses did what they promised. The Chardonnay in the correct glass smelled floral and light whilst in the others it’s aroma was mainly just alcohol. Taste wise in the wrong glass it was slightly acidic and heavier than it should have been but in the right glass it was light, fruity and refreshing.

Maximillian also told us of the importance of decanting wines and what a blasphemy it is to drink wine poured straight from the bottle. He informed us that all wines, and even champagne, should be decanted at least an hour before drinking to allow it to become ‘aerated’. We were then subject to a blind tasting where we sampled two red wines in two identical glasses. The first tasted harsh and was drying on the mouth whilst the second tasted rounder, smoother and less tannin stuffed. It turned out the wine in each glass was exactly the same and the only difference was that the second had been decanted.

You canfind out more about Maximillian Reidel, the CEO of Reidel in Douglad Blyde’s interview.

With the Christmas gift buying season in mind Reidel have released a range of festively coloured and impressively shaped decanters, priced at £120. To check out their huge selection of both wine and spirit glasses visit