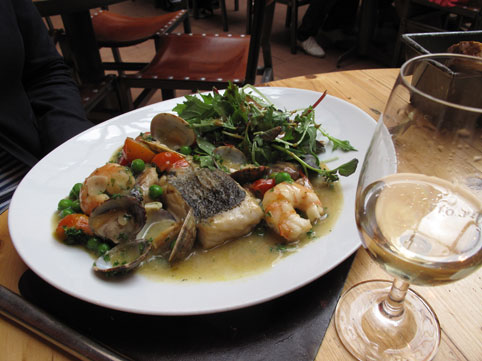 On the 21st of July, Spanish restaurant and award -winning bar Camino is holding an interactive masterclass with experts from the Tio Pepe online guide and lots of good food and drink to match. Tickets are free and available on a first come, first served basis. We went for a preview

Say sherry and most people think Grandma, at least I know I do. My grandma would always demand a glass of Harvey’s Bristol Cream on a Sunday and then would equally reliably choke on it at some point. This coughing fit tended to drown out the Navy Lark on the radio so I took rather a dim view of it. How could you laugh at Lesley Phillips’ ‘left hand down a bit’ when Gran was hawking her lungs out?

Well, while younger readers Google ‘The Navy Lark’ and possibly even Lesley Phillips, let’s turn to a sherry with a far more attractive image – Tio Pepe. The fact that I am eating tapas and drinking the stuff with Tio Pepe’s Marketing Director Jeremy Rockett should not be seen as bribery and corruption, he’s not actually paying for the meal. He has however chosen El Camino to have the tasting and this modern Spanish place is suited to Tio Pepe’s modern style.

It is of course crisp, lemony and dry, reaching areas of the palate and mouth that wine often does not. Chilled down it becomes the perfect accompaniment to El Camino’s excellent Galician octopus, which is actually better than the versions I’ve eaten in Galicia itself. More tender and deeper flavoured. The Tio Pepe also helps to put out the fire that comes with the Russian Roulette of Pimentos Padron. Having had three plain ones in a row I got cocky and popped a great big pimento in my mouth and a few seconds later realised I had drawn the very hot straw. 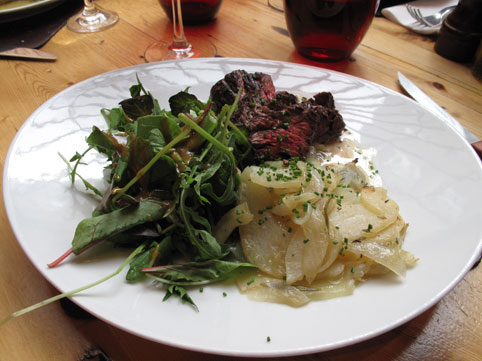 As we ate Jeremy evangelised on Tio Pepe, which is after all his job. He doesn’t need to try too hard though as the product is undeniably a good one. It washed down oily chorizo with ease and moisturised mixed croquettes. It went particularly well with slivers of ham, balancing the salt perfectly. It’s a grown-up kind of drink, I felt all sophisticated drinking it and Camino serve it well in half bottles kept in coolers on the table.

Richard Bigg Camino’s owner, trailing a lissom camera person, came over to say hello and watched us order up the onglet steak. This unique steak, called hangar in America and solomillo de pulmon in Spanish, ‘hangs’ from the cow’s diaphragm. It’s not always tender but it is always flavourful and true steak fans prefer it to the wooliness of overrated fillet. Cooked over Camino’s charcoal grill ‘imported from Bilbao’, as Richard points out, it was done fast and served rare, as it always needs to be.

I could get a taste for Tio Pepe, in fact I have and the fridge door now has a bottle in situ. I recommend foodies do the same.

If you’d like to find out more about Tio Pepe and fine food matching, go here www.theartofgoodtaste.com where experts like Mark Hix and Sam Clark pass on tips, tricks, musings and more.