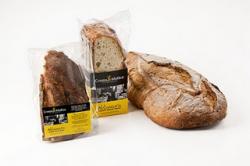 Crosta & Mollica make bread, rather nice bread and I’m not just saying that because they sent us some for free.

At Foodepedia we don’t go in for disclaimers about how we get our greasy mitts on stuff, nor for pious hand on heart statements about being honest in our opinions about what we get.

Journos have been getting free stuff since William Caxton turned his first handle, it’s all part of the game and it’s naive to pretend otherwise. We simply ignore any crap we get and don’t write about it.

The toasting bread I really liked, it comes in very large slices and it’s called Altamura – a traditional artisan bread, using 100% durum wheat flour all ground in the area of, yes you guessed it, Altamura. I covered it in some quality jamon, some Comte cheese and tomatoes and proudly calling it a Tartine, whacked it under the grill for lunch. The bread was just right, a chewy texture that released plenty of flavour, it held up the topping physically and tasted good too.

It made pretty marvellous, if rather expensive, breakfast toast as well. Honey added extra flavour to the bread’s already subtle sweetness. Marmite was a waste of the bread and of the Marmite too, but we had to at least try. Dunking the bread in decent olive oil we found to be probably the very best way of appreciating the true flavour of both the oil and the bread.

It’s £1.79 for five slices and of course it’s sold in Waitrose, where else? Oh well Selfridges too if that’s your corner store. The pack claims quite a long shelf life, which is surprising as ‘real’ bread tends to grow mould almost as soon as it gets home, but there must be a secret to it. 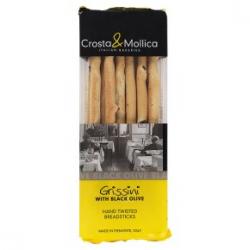 They also sent some breadsticks (grissini) which sent me spinning back to the 70s. Dad always said not to touch the breadsticks set out in their jar at our local Trattoria, He said they weren’t supposed to be eaten, they were there for decoration and had been there since 1945, and that if we ate one we would break our teeth.

Well finally I got to eat some thanks to Crosta & Mollica and of course these were not at all hard, but gently friable with added flavour thanks to the extra ingredient of black olive oil. I still don’t quite see the point of them unless you stick one up each nostril to amuse the children (try it, it works) but they are very munchable over drinks.

They make a whole range of bread type things at C&M and you can find out more by checking out their product list at Waitrose or going to the Crosta & Mollica website.

And you can WIN some Crosta & Mollica Bread here