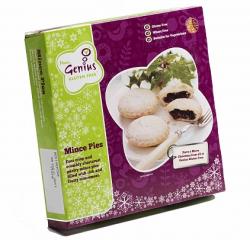 I don’t think I’m gluten intolerant, but there is definitely something in shop bought pastry that has me heaving a few hours after eating. As a result Mr Kipling is dead to me now, along with his delicious Bakewell slices, and although I still can’t resist a pork pie, I accept the penalty that will almost certainly follow.

The same penalty comes when eating shop bought mince pies too, which at this time of year is a bit of a problem. So when a box of Genius Gluten Free Mince pies landed on our doorstep I snatched them off reception’s desk and retreated with them to my office.

The short crust pastry is made with maize starch, so avoiding wheat altogether, and the resulting pastry is remarkably light and friable, so much so that there ‘s a tendency for the pie to snap and fall halfway up to eager mouth. This is not a real problem if you eat two handed.

The filling is a proper delight. Very rich mincemeat and you can clearly taste Bramley apple in there. as well as juicy sultanas and other dried fruit. Spices are traditional with cinnamon, nutmeg and ginger amongst them.

No suet, which may annoy purists, but will make vegetarians happy. The poor things have it hard enough at Christmas as it is, what with all the carnivorous action all around, so at least they can eat pies.

Genius make a whole range of gluten-free products, and as more and more people seem to be gluten intolerant these days, almost as many as those who claim to be dyslexic in fact, this can only be a good thing. Are people really getting less tolerant of food stuffs or is it all solipsism and middle-class angst? Let us know