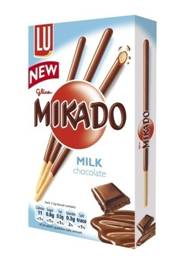 If there’s one thing wrong with chocolate digestives, apart from the fact that the best known brand has cut the fat content by 50% and thus, at a stroke, cut the taste by half too, is that you can get awfully messy dunking the blighters.

Well who else but the Japanese could spot a gap in the market and dive in to fill it?

Mikado are a long thin crispy biscuits part covered in chocolate that look uncannily like those things we used to light fireworks with, back in the day when we adults were trusted to light our own fireworks that is. They have actually been eaten in Japan since 1966 but thus far had failed to set foot in the UK.

The packaging is classic Japanese, as memorably pastiched by Homer Simpson’s Mr Sparkle pack, and the whole thing is done with fun.

We tried sword fighting with them, as well as dunking one end in tea and sneaking up behind the mac operators and sticking a tea covered end in their ear. Don’t try that at home kids. We also tried eating them and they are very addictive.

Kratt have brought these brave new biscuits to our shores.

Mikado is available in three styles: