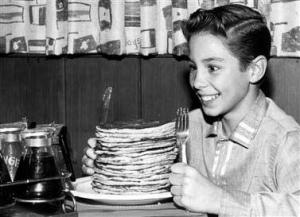 Do poor tasting pancakes stop you from having a flipping good time every year? With Shrove Tuesday fast approaching, the key to perfect pancakes is understanding the science behind them.

The Science [So what? So everything] campaign (www.direct.gov.uk/sciencesowhat) has teamed up with food scientist Melanie Loades, and food science course leader from London Metropolitan University, Richard Marshall, to bring you six easy steps to make the perfect pancake.

Keep the mix fine and light

It’s important to separate out all the fine flour particles and add as much air into the mix as possible, to give the pancake an even structure when cooking. So, make sure that you sift any lumps and bumps out of the flour before you start mixing it with the eggs. Melanie says: “Because the aim is for the pancake to be as thin as possible, whilst staying in one piece, the smaller the particles the better, as they will provide a more even frame for the pancake. Large particles disrupt the structure and that is what causes it to break when cooking.”

Melanie advises: “The final mix should be like single cream, in order to give the perfect thickness when cooking. So, whisk well, allowing the carbohydrates and proteins from the flour and egg to blend. This helps the two ingredients to mix together, by stretching and wrapping around one another and the small air bubbles. Richard Marshall explains the importance of beating the mixture well: “It is essential to get the thickness of the mixture right – too much milk and the batter will be too runny and the pancakes too thin with a risk of burning; too little milk and the egg proteins won’t be diluted enough so the pancakes will tend to be heavy.”

For a perfect pancake you must aim to have a slightly crisp outside with a soft inside, whilst keeping it as thin as possible. Like with all good experiments, a test run works well, so be prepared to sacrifice your first pancake in order to get it right. Melanie says: “The pan should be hot to evaporate the water and to set your protein and carbohydrate mix on the outside of the pancake quickly. Add a small amount of butter to the pan to give a thin even coating. Then place a droplet of water in the pan, which should skitter across the pan quickly when it is at the right temperature. It is now time to add the pancake mix. With the pan at this temperature the pancake will rapidly evaporate its liquid when it hits the pan, almost ‘floating’ on a layer of steam for a few moments whilst the mix sets, which lessens the likelihood of burning. Cooking at a higher temperature also means less fat will be absorbed into the pancake, making it crispier and less greasy.”

You will know when the pancake is ready to turn as it will move freely when you jiggle the pan a little which shows that the outer surface has set. Melanie says: Don’t cook it any longer as the liquid will be driven off from inside the pancake making it brittle, and more likely to break.” Richard adds: “Physics shows that the pancake should be close to the far side of the pan and then it takes just a little flip into the air, a half spin and catch it up the other way!”

The final colour of the pancake should be an even gold with a few darker spots. Richard explains: “Some of the colour comes from the egg yolk but the rest is a reaction between the milk sugar lactose and the proteins of the egg, flour and milk. This reaction is called the Maillard reaction, after the French scientist who first studied it.” Lactose is what’s known as a reducing sugar, which can react with certain amino acids in proteins and form a series of brown-coloured compounds. Richard adds: “If the cooking goes on too long, this reaction produces bitter-tasting products which spoil the taste of the pancakes, so make sure they’re not over-cooked.”

Of course there are many potential combinations of ingredients you can add to your pancake, but Richard suggests: “Serve your pancakes with lemon juice and a little sugar. The lemon juice not only has a nice clean, sharp flavour but the citric acid in it stimulates our taste buds on our tongue which whets our appetite. The sweetness of the sugar is another desirable characteristic. As with salt, we are primed to identify sweet foods because the sugar is a readily available, easily digestible source of energy.”

10. Fill the pancakes with ingredients of your choice, eat and enjoy!

Tip – Adding a tablespoon of melted butter at the end of mixing also works well. If you are going to do this, add in another 10g flour at step 1.