All over the UK food lovers are coming together to celebrate local produce and local stars. Why not wander over to Worcester for some serious flavours, add Aldeburgh to your list of must eats this year, carry on down to Cornwall and drink a dram or three in Scotland?

The fourth Aldeburgh Food and Drink Festival at is gearing up to be bigger and better than ever. During the main weekend event (26th & 27th September) at Snape Maltings, Suffolk there will be over 70 local producers showcasing their goods as well as offering glorious tastings of food, wine and beer. There will be two stages, each having back to back schedules of cookery demonstration and talks with leading celebrity chefs and local food heroes. Other key highlights include musical entertainment, river trips, guided RSPB walks and this year there will be an abundance of activities for children. What’s more, children are free and there is free parking! There is a £5 admission for adults for the day, and you will receive a free jute bag with a festival programme. Tickets can be purchased on the day or online at www.adnams.co.uk/aldeburgh.

A new addition to the calendar for 2009 is the Worcester Feast which takes place in the impressive surroundings of the Cathedral, the Cathedral Gardens and grounds of the historic Commandery 4th to 6th September

The Worcester Feasts a festival of fine food and wine sourced locally, nationally and internationally.

The event runs over the 3 days with over 120 exhibitors plus many other features and attractions. This will be an event no self respecting food or wine lover should miss.

An army of Cornish food and drink producers and chefs will illustrate just why Cornwall is so deserving of its ranking as the UK’s number one food destination outside London* with a selection of cuisines that illustrates the creativity, versatility and taste for adventure that characterises Cornwall’s food elite. The cuisines of Lebanon, Malaysia, Spain, India, Mexico and Asia will all be represented in either The Croust Bar at the heart of the festival on Lemon Quay or in the various festival Food Fringe events taking place around the county.

A stellar line up of Cornwall’ top chefs is scheduled, headed by such luminaries as Great British Menu’s Michelin-starred Nathan Outlaw, Neil Haydock from Fifteen Cornwall and Kevin Viner of the legendary Viner’s . The Chefs’ Theatre, sponsored by Cornwall Catering Excellence, will also feature chefs such as Zac Anderson from the Porthminster Café and Jude Kereama from Porthleven’s Kota restaurant and a Wine Masterclass with St Austell Brewery’s own Master of Wine, Xenia Irwin. www.cornwallfoodanddrinkfestival.com 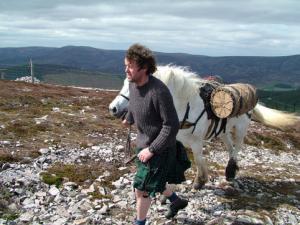 2009 marks the 250thh anniversary of the birth of Robert Burns, Scotland’s national poet and great lover of whisky, with over 300 events, many of which are whisky related.

Whisky Week (6 – 12 September) starts the autumn festivities with a series of seven spectacular whisky dinners and events throughout Scotland. Starting in Edinburgh and culminating in Whisky Live Glasgow, Whisky Week brings unrivalled access to Scotland’s distilleries, ambassadors and whiskies. There is also the chance for whisky fans to meet distillers and enjoy menus of carefully matched local food and whiskies.

The Isle of Barra is hosting the first ever Isle of Barra Whisky Galore Festival (18 – 20 September). A special mobile cinema will show the film throughout the festival. Festival goers can also take part in the hunt for whisky across Barra, visit the locations that feature in the film, try their hands at traditional dancing at a ceilidh, enjoy lots of live music, or take part in the golf tournament..

Speyside is Scotland’s most productive whisky region and this autumn a special Autumn Speyside Whisky Festival (25 – 28 September) takes place. For energetic whisky lovers, there is the opportunity to paddle down the River Spey in a canoe enjoying excellent food and whisky as you go; or the chance to take to the hills following smugglers’ routes of old.

In the south west of the country, one of Scotland’s literary hotspots, Wigtown celebrates whisky at its annual Stena Line Wigtown Book Festival with a special Whisky & Words (30 September – 3 October) mini festival. Top whisky writers, including Charles MacLean, Dave Broom and Gavin Smith, will be hosting events. Nips and tastings will be available at most events to combine the practical whisky information with the literary themes.

More information on these events and the full Homecoming Scotland 2009 programme can be found at www.homecomingscotland2009.com.