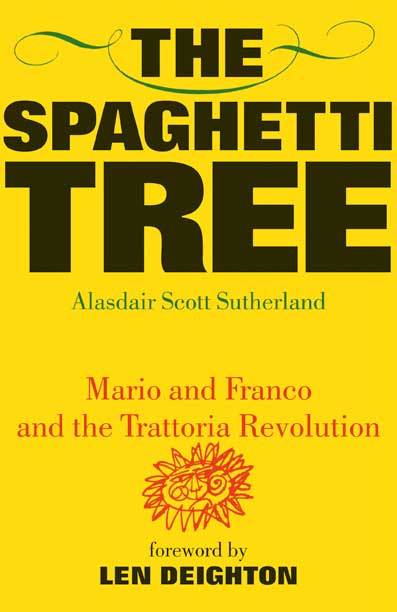 The story behind the popularity of Italian food in Britain will be revealed at a series of special events at Carluccio’s in April and May.

Between 6.30pm and 8.30pm on selected dates, Author Alasdair Scott Sutherland will host an evening of fine Italian food, wine and literature as he tells the story behind his brand new book ‘The Spaghetti Tree: Mario and Franco and the Trattoria Revolution. A book signing and live Q&A session will follow before all attendees enjoy an authentic, two-course Italian dinner for just £8.50.

The Spaghetti Tree is the colourful and untold story of Britain’s growing love affair with Italian food. Before the Trattoria Revolution, many Britons believed the 1957 BBC Panorama April fool story that spaghetti grew on trees. Alasdair’s book charts the Italian invasion of Britain’s food and restaurants, of which Antonio Carluccio, with his TV series, his books, his seminal Neal Street Restaurant, and his eponymous Carluccio’s caffès has been an integral part.
Guests will learn how the popularity of Italian food has spread, from simple trattorias in Soho in the 1960s, through to today when pasta, pancetta, pesto, prosciutto, polenta, pomodoro, pecorino and parmesan can be enjoyed across the country. After which they will have the chance to indulge in a delicious Italian two-course meal with coffee for just £8.50, or add a glass of wine from the carefully selected list, for £11.50.

Alasdair will be signing copies of The Spaghetti Tree during the evening. The book will be sold at £14.99 and is available from all Carluccio’s stores and online at www.thespaghettitree.co.uk