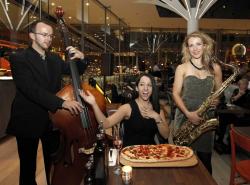 After the success of the December Sessions at St Giles, Zizzi is carrying the musical evenings into January and like before, diners can sing for their supper. Diners at Zizzi’s newest London restaurant who get up and sing in front of the restaurant audience will get their supper for free, and raise money for youth charity The Prince’s Trust in the process. Money raised for The Trust will give disadvantaged young people the confidence and skills to find a job

Launched in December 2010 in support of The Prince’s Trust, the Zizzi Sessions will continue to be hosted each Thursday evening from 6th January – January 27thby Grammy nominated singer and saxophonist, Becki Biggins.

Becki will perform modern takes on jazz classics accompanied by The Malcolm Edmonstone Trio. Each week Becki will also introduce diners to up and coming diverse musicians and invite them to sing for their supper, literally. Diners who get up and perform will be rewarded with a free main meal; Zizzi will also donate the price of the dish to The Prince’s Trust.

Martina Milburn, Chief Executive, The Prince’s Trust said: ‘Thousands of vulnerable young people in Britain are struggling to overcome unemployment and poverty. We’re thrilled to work with Zizzi to give these youngsters the self-belief they need to transform their lives. Just £3 can provide two weeks’ support for a vulnerable young person, helping them find their first job”.