Our visit to Battlesteads was made on the hottest day of the year so far. We spent an hour on a warm train, with leaves poking their verdant pixels into our eyes, and another half in a taxi with black leather prickling our skin. The sunshine pressed against the Northumberland stone houses, hills gathered against the skyline, cattle settled in their curves and stone walls free-wheeling across the fields. It was the perfect day for the Tyne’s hinterland; it was as if Battlesteads had planned it. 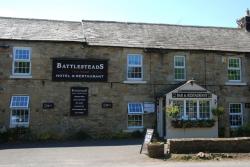 The hotel and restaurant sits just north of Hadrian’s Wall. From the outside it could be mistaken for just another small pub in another small Northumbrian village but this retirement project by Richard and Dee Slade is rapidly expanding both in size and reputation.

With the midday sun above and Roman ruins over the next hill, the sunken patio felt like the stage of a Roman amphitheatre, surrounded by rising banks and stone walls on three sides. Rather than trials of martial ability and braveness though, the battle was with our appetites, rapidly diminishing in the heat as legions of dishes marched forth from the kitchen. We left victorious but not all-conquering: parts of pudding and a final complimentary chocolate were left standing at the thought of the imminent taxi ride.

Three starters were the first dishes to enter the arena. The star was the chicken liver parfait – a dreamy, creamy trapezium wrapped in a buttery herb blanket. The beef carpaccio however was fighting a losing battle with a muscular, over-bearing combination of truffle oil and rocket. A platter of smoked meats, fish and cheese from a local smokery were slightly underwhelming, too embarrassed to wear their tastes on their sleeves.

It seemed that the more the chef tinkered with his ingredients, the better they tasted – the flat-packed starters were less inspired than their heat-altered rival. For some though, it was already too much. In a suicidal turn, a knob of butter had swum off the edge of its plate.

The main courses were where the accomplishment of the chef showed itself. The smoked hake risotto was a pleasant English variation on the Italian classic, almost a thick rice pudding in consistency but with a deep fish-stock savouriness. The crater at the dish’s summit was filled with flakes of hake and a perfectly poached egg whose yolky innards ran like lava down a volcano’s flanks. The richness was perfectly offset by a scattering of delicate aniseed greens.

The braised lamb shank again showed an intuitive culinary touch. Rosemary ran with aplomb from the tender meat down into the depths of a mead gravy while some swiss chard made a rude but welcome interruption. Its devourer showed admirable perseverance by clearing his plate of such heavy food in those Northumbrian tropics.

In the last round of the patio battle, the deserts almost finished us off. A rich treacle, hazelnut and orange tart was unwillingly left half-standing despite its delectable balance of sweetness, sharpness and crunch. A wobbly whisky and marmalade bread and butter pudding ended its brief existence in a pool of melted ice cream.

And through all of this, Battlesteads wore its green credentials lightly. In fact, the only green we saw was the background to the ample wine list, each bottle with a badge of virtuousness next to its name – organic, working towards biodynamic status, low weight bottle etc.

Explore the site a little more however and they emerge. An electric car was spied in the carpark and fields filled with organically grown produce for the kitchen stretches beyond the patio. The owner assured me that the noise pollution that afternoon – deafening birdsong and the buzz of insects in the garden boarders – was the result of their efforts to reintroduce biodiversity to the land surrounding the hotel.

With lunchtime mains hovering around £10, puddings at £5.75 and an evening three course meal at £26.50, this may be more expensive than other lunchtime pubs in the area, but there is no real comparison. What Battlesteads offer is thoughtful food to the morally self-conscious, hearty food to the hungry and tasty food to both.