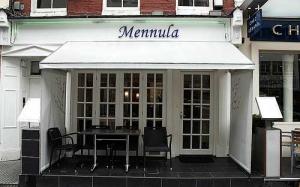 Santino Busciglio is a very good Italian cook; he impressed at No 12 where he had to struggle against the fact he was cooking in a hotel restaurant – critics don’t like hotel restaurants – and a location at the arse end of nowhere. Now he’s got his own little space.

‘Bijou!’ he corrects, smiling cheerfully his large frame filling the room. If he raised both arms he could touch both walls. It is certainly attractive and neat; white painted to maximise light, delicate artworks and even a private room out back. Right now the French windows are firmly closed and caulked against the cold wind, but come summer the terrace on the pavement is going to be a great place to sit.

Now totally in the driving seat as Chef/Patron Santino can serve exactly the kind of food he wants. It’s Italian and Sicilian as befits his roots and it has style and glamour that makes it modern without abandoning tradition.

Mennula means almonds and so for nibbles we get some of those, direct from Sicily, as well as lemony olives and an arancini each. The almonds are remarkably sweet, a nice change from the bitter horrors I’ve been eating over Xmas. 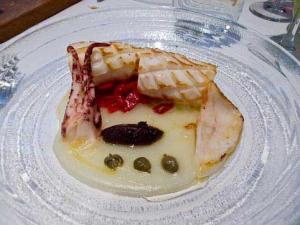 Squid, potato sauce, roasted peppers and olive pâté starter was a big bit of squid, neatly seared not a moment too long to deliver a soft, buttery, texture. I loved the arid bite of the olive pate/tapenade and the kiss of the sweet pepper too, but couldn’t really like the potato sauce. For me it seemed too much like the water I overboil potatoes in and it was forming a skin on top.

No nasty tang of vinegar in the Baby artichokes, rocket and fonduta di Ragusano, not that I expected any, they were bound to be fresh. The fronds of rocket threatened to engulf the poor babies, but in fact were judged correctly for balance and all sat in a puddle of Sicilian Ragusana, a spun curd cheese heated and stretched like mozzarella and a firm favourite in Sicily.

I know I shouldn’t, not with the size of my stomach, but I had to have a primi of pasta. I compromised by sharing it. The Maccheroni with braised lamb, mint and pecorino was all I hoped for; the slow cooked shoulder of lamb pieces generously scattered amongst the home made maccheroni. This was cooked al dente and a bit beyond, which I rather like. Some restaurants seem to think al dente means ‘chalky’. The fresh mint gave a pleasant `Sunday roast’ kind of feel to things and the pecorino added a salty spike. I could have kept on eating this all day.

Wrap anything up in pancetta and you get my vote, normally it tends to be chicken breast that gets parceled, but Mennula ups the ante by putting Thumper in – Rabbit wrapped in pancetta with aubergine sauce, spaghetti of carrots, pine nuts, sultanas and black cabbage. The pancetta kept the rabbit from drying out, as well as giving it a bit of salty seasoning and the meat was virgin white, delicate and moist. I don’t know how Santino does the carrot spaghetti, but it was fun and colourful, while the Cavolo Nero delivered its classic bitterness to offset the sweetness of the carrots and the sultanas. It looked good on the plate and it tasted even better. A’s line up of Wild Boar ravioli looked like soldiers on parade and had disciplined flavors well marshaled together and was fragrant with white truffles. Decadent and yet restrained it was another master class in simple, Simon. 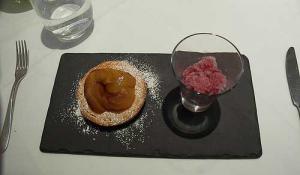 And so to dessert; Sicilian canola filled with sweet ewe’s ricotta. The cannoli was quite heavy and crunchy which may be the Sicilian Way. Certainly they were far less cloying and over rich than the cannoli you get in every NY bakery. Plum and frangipane tart with custard and spiced sangiovese wine granita looked great- I didn’t get a look in which must be a good sign. It disappeared fast.

Charlotte Street is second only to Soho for the number of Italian eateries in and around it, many long-established and semi-legendary. Mennula is a new kid on the block, squeezed by the surrounding buildings, but delivering cooking that is already flexing its muscles and threatening to kick sand in the faces of the local competition.