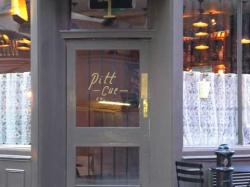 I could have gone to Pitt Cue sooner. I missed them cooking out of a van under Hungerford Bridge, I ignored the hysterical love ins on Twitter. I don’t particularly like eating while standing up and I don’t particularly go a bundle on’rebooted’ American food. The yanks are too fond of sugar, salt and over-large helpings for my liking. Bruce Willis food I call it; it lacks subtlety but it does deliver what a mass-audience likes.

Then Pitt Cue found a permanent home about a hundred yards from our office, a place that had previously been the smallest and most useless coffee shop in Soho, possibly in the world. We could smell Pitt Cue’s smoker when we opened the windows and the queue was so long it almost stretched past our door. Twitter was alive with excited people tweeting blurred pictures of what looked like dog food; we decided we could wait to try it a little longer.

But now I have. It was Friday at 12:30 and we noticed no queue, so L and I despite being well out of the demographic, being over 50, hauled ourselves onto stools. Next to us a young woman seemed to be having some kind of fit, eating ribs and bouncing up and down in a self congratulatory manner.’I think it’s because she fancies the bloke behind the bar,’ said L who is wise in the ways of teenage girls having once been one herself.

So L had ribs and I had pulled pork, both served in trendy tin trays presumably rescued from a camping supplies shop in the Cotswolds. The pulled pork didn’t look very appetising, unless you actually are a dog, but it was certainly tender. The smokiness was excessive though,’it’s carcinogenic, almost’ said L when she tried some. To me it tasted of a product called’liquid smoke’ invented back in 1895. By an American of course. Not that I’m saying Pitt Cue use such a shortcut, but if their efforts are going achieve the same overpowering result then they might as well do.

I liked L’s ribs much better, they literally fell of the bone – when she tried to pass me one she was left holding the bone in the air like an orchestra conductor who’d suddenly gone through at the back  – and I got a lapful of pork and a dry-cleaning bill. The ribs had less of the assertive smokiness so the meat could speak for itself and it spoke very well. Meat is always tastiest close to the bone, and you can’t get closer than a rib. I could have eaten all hers and dumped the unappealing pulled pork. We didn’t like either of our toasted sourdoughs, they were teeth-breakingly hard and flavourless, and the accompanying beans were sugary and boring as if created for small children. The soi-disant (hey, get me) coleslaw was saved by the addition of chilli and I think some shredded pickle and I did rather like that as it had some complication in its flavours,.

Two half pints of lager and it all came to around £35, no starter no dessert and lasted less than thirty minutes. Rather a lot of money I thought for what it was and probably accounted for the smirk on the face of that bloke behind the bar as he took our money. Our cue to leave.

Restaurants like Pitt Cue with their finger food, mess, and loud simple flavours are all fighting for a slice of the under 30 demographic pie but it’s a relatively small and fickle pie, always restlessly moving on to the next big food thing. Pitt Cue certainly do what they do pretty well, but is that enough to build a long-term business in a building? They could well be back on the road this time next year and that is where, I think, this kind of food works best and where it really belongs.