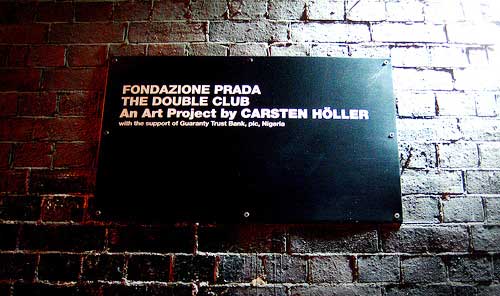 I ventured to ‘The Double Club’ on a double date. The west meets the Congo (and vice versa) in this temporary venture, produced by Prada. Down a dark cobbled alley behind Angel tube, it was an unlikely find. A Victorian warehouse is awning to three spaces woven by artists and graced by fashionistas. The mind behind is Carsten Höller, a German gripped by Congo-mania…

The courtyard bar smells of tin drum barbecued brochettes. One face of the counter is corrugated Kinshasa, serving Primus, Temba and Turbo King beers; the other is 1920’s America, copper and neon, dispensing Ketel-pricked bubbles and a knockout Old Fashioned. A ’tile garden’ forms an antique vision of a future city in Willow plate blue. Through smoked glass, the disco’s dance floor swivels once an hour to an alternating cultural playlist.

We took our seats in the third room. Cut into tiger pad walls, oval hatches bring the kitchen closer. Congolese cooks craft exotic specialities whilst Brits work on homegrown plates. Within a fork’s throw, striking canvases by Accardi, Boetti and Warhol must torment the insurers. The floor is chequerboard African hardwood and brasserie mosaic. ‘Breeding Tables’ are barely designed, as in designed to be bare. They jostle Kinshasa plastic, gentrified in linen. Slim, suave staff are preened into Prada.

Enjoying the effect of black vodka Momos, my friend and his girl, who have been to the Congo, authenticated kitchen aromas. Four pairs of hands efficiently flew across a colourful collage of homely, heart-warming food from the Congolese menu. Sweetly wiry, spinach like aubergine was scattered with UFOs (unidentifiable fishy objects). Part caramelised plantains were as welcomingly biteable and softly perfumed as mini doughnuts. Giant ‘schrimps’ were fleshy, silty and vividly spiced specimens. Goat curry enveloped in yam leaf was slightly moist and rustically leathery like mutton. The highlight was an edible definition of fodder for the credit crunch: white bean casserole with pig trotters, scooped with smoky bread.

A sommelier sporting a brooch of grapes seemed incongruous in this setting, but delivered a suitably cleansing white flower scented Albariño from Galicia, Spain’s octopus capital. Unfortunately it gained plenty of pounds over its 1200mile journey.

Only I remained in the Democratic Republic for my main course. My mega poultry looked Maximuscle fed: a big-boned broiler with a bowl of paper white rice with bite. From the West, veal chops were sizeable, blushing pink centred and served with a jenga stack of celeriac chips and flimsy leeks. My girlfriend took pleasure tearing through fleshy, slow roasted beef short ribs (of pot-au-feu fame). The nude remnants looked like a lath.

Faced with a distressingly early start (the club stays open until 2am on school nights), our friends left, to doze down their meals. We stayed on to celebrate the pleasantly schizophrenic concept. Rather then force two backgrounds to fuse, the artists had playfully inspired curiosity into incongruent cultures.

Despite occasionally eager (but not quite Prada) prices and a service charge greedily rounded to 13p/c, by lifting cutlery we donated francs to abused Congolese women and children. However the experience gave us more than we gave it. And even regardless of charity, I will gladly return.

The Double Club should be on your radar until it is packed up and shipped to Milan in September.