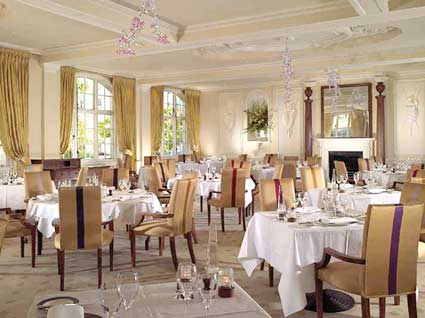 Early spring sunshine is splashing in through the large windows of the Five Star Goring Hotel’s restaurant and bouncing off Swarovski Chandeliers, Linley furniture, sparkling cutlery, crisp glasses and the pates of today’s lunchtime clientele, a large majority of whom won’t see fifty again. At a youthful forty-nine myself I feel as agile as an Olympics pentathlete at an Arthritics Anonymous meeting. I also seem to be the only man not wearing a club tie, although I do at least have on a suit from the Marks & Spencer ‘one size fits all’ Spring collection.

Now this shouldn’t be seen as a negative – I love the atmosphere here, that of the wellborn as opposed to the well to do, having a ‘spot of lunch’ with a proper sommelier in attendance and a wine list as thick as Max Clifford’s address book, not that any of his clients would be particularly welcome. The Goring is one of the few London hotels still in private ownership and Jeremy Goring is the fourth generation of the founding family and very much involved in the day-to-day running of the hotel. Even Derek Quelch, Executive Chef has been in the kitchen eleven years. They could set a TV series here and not need to go far to cast all characters.

And it’s busy. It must be the allure of the hotel, its smart bar and the cooking, which is rooted in the past without being stuffy, and a set lunch for £35. Where else will you still find daily changing trolley roasts and beef consommé on the menu? It’s old school cooking and consommé is a dish that is time-consuming; most chefs would rather lob something into the blender and be done with it. A proper consommé requires beef bones and hours on the stove, the bones roasted and then simmered (not boiled or it will go cloudy) for ages. A hotel can do that, especially if like the Goring, beef is on the menu most of the week so dem bones aren’t hard to come by. This consommé is wafting delicious aromas my way and seems as clear as could be. My own starter of Lincolnshire pork belly has also had the slow-food treatment. Rolled up, the belly has been sliced wafer thin before service so avoiding the usual problem, for me at least, of fibrous pork getting caught in my teeth. The pork has great flavour but the overall colour scheme is that of Airfix Battleship Grey and the apple puree is a bit too smooth for my taste, approaching baby food texture. I would have liked some more lumps and a little less sweetness.

The Roast Peterhead cod that follows looks far more attractive, a crisp golden-skinned fillet sat on a base of cubed potatoes with leeks and a small lake of clam chowder lapping underneath. The cod flakes nicely, the flesh falling away the way ice sheets fall off icebergs in those depressing TV programmes about global warming. Braised shoulder of Castle of Mey beef in ale with onions and carrots has clearly been braised a very long time indeed, just as it should be. The meat is so tender a fork makes it tumble to pieces and the braising liquid has reduced down to a sticky, flavour packed coating. A separate serving of creamy mash in a quaint copper pan is pillowy and perfect.

It’s just the time of year for forced rhubarb and the Goring has champagne pink specimens shipped down from the Yorkshire Rhubarb triangle. A classic example of local, (i.e. UK) produce, seasonally trumping anything that could be flown in from far away. It sits with a beautifully rich shortbread and is the right mixture of tart and sweet with that slight sense of tooth enamel stripping away courtesy of the oxalic acid only gently present in the early season crop.

With afternoon teas and a menu that also includes Welsh Rarebit, vegetables foraged for chef from the Kent countryside, classics like potted shrimps, a beautifully British cheeseboard and even that schoolboy scarer prunes, the Goring is a great big dreadnought of British imperial dining power steaming its own unique track through a sea of mediocre, me too, ‘Modern European’ restaurants. Let’s stand up and salute it.