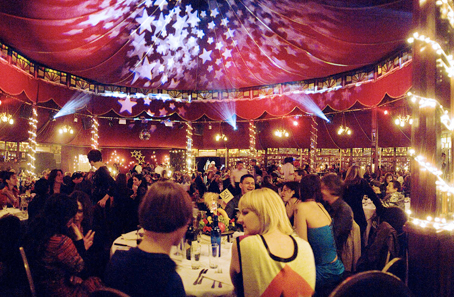 An e-letter from the editor invites me to review Madame Zingara the new restaurant/circus experience. ‘They’ve just set up camp, and I use that word advisedly, next to Battersea power station,’ he writes, ‘and as you’re rumoured to be a friend of Dorothy it should be right up your street.” Quite what my friendship with Dorothy L Sayers, whom I presume he is referring to, has to do with it is not clear. A meal is a meal though and so I go.

Rather hard to find is Battersea Power Station. One can see it clearly enough of course, but actually getting to it is no easy feat. My young friend Chris has piloted the Rolls in numerous circles until we spot the little road that leads in. A fearsome industrial gate policed by burly men in yellow jackets allows access to the large denuded space that was presumably once somewhere to stack coal for the power station.

The Circus tent located here is rather grand, said to be one of the last mirrored interior tents in the world, and as you enter one is transported back to the deliciously decadent days of pre-war Weimar Republic Berlin. Ah dear old Chrissy Isherwood and Stevie-Wevie Spencer, such gay friends and I miss them dearly. Brushing away a sad tear I fall over a midget in an ape costume lurking by the door.

It is undeniably lovely inside; the rich colours, the way the mirrored walls reflect back on each other and the small stage at the centre is wreathed in clouds of dry ice. Costumed theatricals and grotesques amble about and I think I spot my dear friend Giles among their number, but it turns out to actually be the Bearded Lady.

Tables are divided between those on the circus floor, the raised perimeter and the booths around the outside edge where people are intimately flung together. They charge less for a booth, which is odd as in Berlin they would have undoubtedly charged more. Diners are encouraged to dress wildly and extravagantly and I am congratulated by all and sundry on my outfit. When I explain that this is what I normally wear when out to dine they all laugh and call me a wonderful wit. Perhaps it is time to change my tailor.

Clutching our complimentary cocktail we sit at a rather good table, although none can be said to be bad as all have a clear view of the stage, and we nibble some mezze. The whole meal is inclusive in the ticket price and whilst the main course is a choice of three, the rest is fixed. Quite understandable when you are catering for what must be about four hundred guests simultaneously.

The running order, once the doors shut sharply at 7:45, is act/food/act/food/act etc which is not to my mind ideal. I don’t want to give the game away too much but the first act featured some remarkable work on a suspended trapeze and then some very large ladies singing wonderfully. Just as the momentum built however, it was stopped to raise the lights to serve the first course of mushroom ravioli. No doubt it has something to do with health and safety rules, as so many things do.

The acts are really very good: some marvellously muscular men performing ensemble athletic feats which made even me blush, young women performing semi-Sapphic aerial gyrations that would have had the police through the door a few years back, comedy troubadours and great singing. The food throughout is really not bad, the sort of thing one would expect at a decent upper-middle class wedding, and the evening ends on a sort of orgiastic high of crowd dancing. We joined in enthusiastically as the three large ladies belted out one of my favourite songs, ‘It’s raining men’ and we partied on for half an hour after the last act had left the stage.

Madame Zingara is only in London for a short while before touring the country. As an antidote to financial gloom it hits the spot and delivers a fun night out that’s ideal for groups. Camp and louche, decadent and professional, as an entertainment machine it really is well oiled. Which reminds me, I have friends coming round so I must go and get ready.