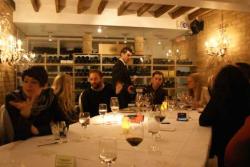 ‘Your wine selection has rendered sexual enterprise later this evening exceptionally undesirable and I shan’t even let you touch me, as I believe your profound ignorance can only be a highly virulent disease created in a laboratory at the behest of a totalitarian regime.”

This statement, made by a woman aghast at her date’s choice of wine, was entirely fabricated for this article in order to illustrate the pitfalls of choosing the wrong booze during a Valentine’s dinner.

But if those words are slightly warped, semi-accurate echoes from your own uncomfortable past, help is at hand from Thierry Tomasin, former head sommelier at Aubergine and La Gavroche, who owns Angelus restaurant. Though he modestly asserts that he is ‘not the sex doctor”, the ‘Negotiating the Wine List’ event has been devised to aid those men for whom the sight of a wine list provokes both health and romantic trouble, and Thierry is the knowledgeable and compassionate host for the evening.

Between the three courses of an excellent meal, beginning with a starter of marinated salmon, citrus fruit, herb crème fraiche and caviar, Thierry talks not just about the reasons behind his wine choices for each dish but also more generally about the culture of using your sommelier or waiter to make good choices. He sympathises with people who can only sit shell-shocked when handed a wine list ‘as thick as a dictionary” and recognises that there’s often a temptation to spend more than is necessary, particularly if you’re not familiar with the wines on offer.

With so much experience as a sommelier, Thierry is the perfect person to give tips on how to get the right bottle at the right price. He has advice on how best to approach restaurant staff so that they’ll really look after you and what questions to ask them in order to get a wine you and, more importantly, your date will enjoy. He’s an engaging character and the advice is entertaining as well as useful, particularly when he acts out how to subtly indicate your budget using nothing but the wine list and some very Gallic eyes/gesturing.

Of course there’s substance to the evening as well as style. Both the wine and food exemplify Thierry’s belief that romantic occasions call for a lighter touch that doesn’t lead to heavy bellies and heavy conversation. The viognier with the salmon was fresh and floral with a slightly flinty quality and it was only enhanced by the fish. Pink slices of duck breast atop garlic potato puree were accompanied by a very reasonably priced red from Bordeaux that wasn’t at all overbearing, and champagne was a better accompaniment to a light and gingery rhubarb millefeuille than a sticky would have been.

Negotiating the Wine List will take place on 7 February and was originally intended as a one-off evening for men only in the run up to Valentine’s Day. The concept has proved appealing to women too (it is 2012 after all), so there is now a night for the ladies on 2 March, with a mixed gender evening to follow.

In truth, the event will please anyone with an interest in wine, not just those who have sat basting in beads of their own sweat whilst studying the wine list on dates of yore. Thierry is a character as well as an expert and the private dining room at Angelus is a relaxing environment. Thierry famously considers sommeliers as ‘salesmen of pleasure” and the food, wine and conversation at the press dinner suggest he at least is living up to his own billing.

Places at the dinner are priced at £75 a person and includes 3 courses with wines chosen by Thierry. Places are limited so please book early to avoid disappointment.