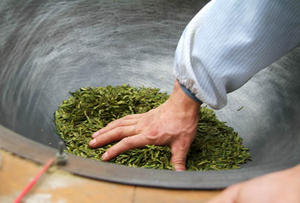 The package on my desk says ‘Pre Rain Organic Dragon Well Supreme Green Tea | Long Jing Dragon Well green tea. Picked on 1st April 2009 from Dragon’s Staff garden. The first of the year, before the Qing Ming festival.’ Blimey,this is tea with serious provenance, they could probably tell you the picker’s star sign too, if you wanted.

Clearly Jing are no chimps when it comes to selling tea and their tea is indeed extraordinary. These are the new 2009 spring-fresh green teas and white teas now coming into the UK to join Jing’s already strong quality line up.

We had a bit of a job finding somewhere to buy a tea strainer around the Foodepedia office – shops seemed to think it was an odd request and, in the age of the terrible tea bag, perhaps it was, but we did eventually get one from a small corner place. With our palates cleared by some London tap water and the evil coffee percolator banished to the corridor so its fumes wouldn’t sully the tea’s purity, we started boiling our water.

Boling water is itself a bit of an art. Surprised? So were we. The thing is, as Jing point out, you don’t want to boil all the oxygen out of the water as that creates what is traditionally called ‘old man water’. Hmm why does that sound particularly disgusting? Different teas should be made with different levels of boiling water, normally the stage just before the kettle starts making those banging noises. Some teas should be made with water that’s not even boiling at all, but just on the cusp, with bubbles the Chinese call ‘shrimp eyes’. 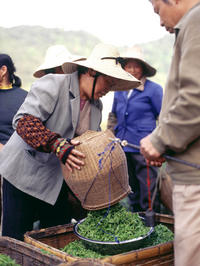 With this in mind, we tried three teas from the new April-picked range and even the hardened drinkers of Sergeant Major’s Tea (stewed, milky and full of sugar) were keen to have some more. We spaced out the tastings over a morning so as to not OD on the goodness and thus undo days of dissipation. Green and white teas apparently have many health properties, from weight loss aid and cholesterol control to reducing the risk of breast cancer in women and all kinds of cancers in men

Well maybe so, but even if you don’t necessarily believe the health claims you can still drink these teas for their sheer deliciousness. It’s now become something of an office ritual although we haven’t yet got the glass teapot and we do still sometimes use tap water and not pure bottled water.

These are teas to appreciate like wines. Boil and brew carefully, pour with respect and savour the aromas before tasting, because just as wines are made from a variety of grapes so teas are made from a variety of plants. Just like wine, a Camellia bush can produce different tea flavours just from being grown a hundred yards away on different soil and with different amounts of sunlight. The blending and time of picking are all an art.

The Jing website is elegant and beautiful, although for some reason the text on most pages has a habitofrunningwords together every other line. Here you can read about the teas, buy teas and equipment on mail order, learn advanced tea making skills and even watch training videos.

Of course it’s unlikely we in the UK will ever give up on black tea and I am sure the good people at Jing enjoy a mug of tea and a Hob Knob as much as anyone else, but if you love fresh flavour and a bit of ritual then Jing teas are the ones to raise your cup to.