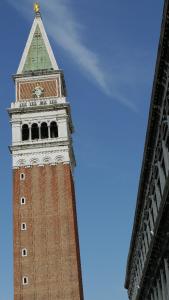 Heavy-eyed from the before dawn start and infected by the pitch and roll of the crowded vaporetto, now departed amid squalls of silt, sand and salt, I sleepwalked into tourists’ photos. Craving more dream, less reality, I dialled Dacotah, who immediately administered a tasty treatment…

I was lured to Venice, not for its sun-specked jade corridors, but the bar dens brimming with sparkling wines from the Prosecco grape. As guest of ‘Bisol’, a premium producer who have rendered vines into something which agreeably surges drinkers’ veins since 1542, I would also experience the unveiling of their latest project, a revived walled vineyard, six room villa and Venetian restaurant on the remote island paradise of Mazzorbo.

My venerable guide, Dacotah Renneau is Bisol’s biggest believer. She steered me by phone (or ‘remote control’ as she put it) towards ‘Harry’s Bar’. Now a government endorsed national monument, the once secluded watering hole of artists and actors is the origin of the Bellini cocktail and Carpaccio dish. But as I reached for the brass handle into the opaque windowed room lit by a perpetual fluster of camera flashes, she swivelled me to Benetton’s Hotel, ‘Monaco and Grand Canal’. As sun triumphed cloud, my mood improved once the white jacketed waiter glided over with a tall, chilled cocktail and salted nuts (covered to defy brave birds).

According to Giuseppe Cipriani, former owner of Harry’s Bar, the best Bellini is one part white peach purée to three of Prosecco. It is named in honour of renaissance artist, Giovanni Bellini, whose painting of a Saint’s toga approximates its shade. Further revealing Cipriani’s artistic leanings, he named his ruddy, raw pounded beef dish after the blazing red favoured by Vittore Carpaccio (who studied under Gentile, Giovanni’s brother).

Regardless of its roots, I enjoyed the drink amongst a multitude of millionaires on the Monaco’s terrace facing the restored ‘Punta della Dogana’ (custom’s house), now modernist museum. 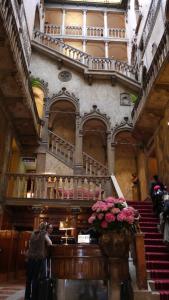 Although effortless, velvety, pétillant, and on account of the peaches being just in season, nervy, this was good, not great, according to Renneau. She had joined me, promising, ‘we’ll drink Prosecco for 72 hours’, adding, ‘you won’t get a hangover.’ For the best Bellini, she seized one of my bag’s straps, me the other, and we sped with our cargo to Hotel ‘Danieli’. According to Italy’s leading gastronomy guide, Gambero Rosso, this is her best bar, a title it has held for five years in a row.

Barman, Stefano’s version was sweeter, cooler, creamier and smoother. Its finesse stemmed from three variables. Firstly, practice. Not only does Stefano blend a minimum of 400 Bellini per day, but the venue, which spans three palaces, has been receiving VIPs for six centuries. Secondly, the ice-filled, handmade Murano ‘Gallione’, a hybrid between jug and outsize glass, uniquely combines and cools the drink. Thirdly, although partisan, Renneau purred about how the flavours and texture of the Danielli’s preferred Prosecco, Bisol’s pear, almond and wildflower scented Crede cru makes all the difference.

Brimming with bubbles and feeling peachy, we once more shared the duty of my bag, riding the vaparetto along the Grand Canal. Renneau mentioned that when locals sitting at the water’s edge hear the siren of emergency services, they raise handbags and feet as a precaution against the wash. But tourists get soggy! Escaping the main artery at the San Angelo stop, we came feet to tyres with the unthinkable – a car (embellished with the image of a naked lady). 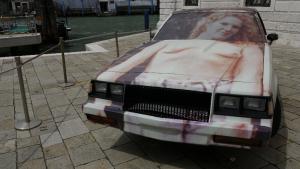 We finally abandoned my bag at a spacious, split level apartment close by. Annexed to the ‘Locanda Art Déco’, this residenza was fragranced with Tuscan pot pourri from 12th century ‘Farmaceutica’, ‘Santa Maria Novella’. Cool and comfortable, the couth accommodation had gleaming Terrazzo, a nifty kitchenette, and rugged beams tamed by stencils.

Although I remained unwaveringly keen on the 72 hour Prosecco project, I craved sustenance. We wound our way along tight backstreets towards the small, flame flanked doorway of ‘AVOGARIA’, one of the city’s most contemporary inns. There, two of the three bedrooms open onto private courtyards. Joining us was the august, Alexandra Hai who is Venice’s first lady gondola operator. Hai and ‘Pegasus’ are allied to the Art Déco and its sister venues. Alongside pristinely al dente orzo vongole was the garish garnish of drag queens – a monthly event.

It was time for sleep. En-route to our respective residences, Renneau gestured to the feet of passers-by, echoing in the otherwise silent night. ‘You can tell a Venetian man by his shoes,’ she said. ‘He can’t show off through the car he drives, so he does it through his shoes!’

Just before bed I opened my fridge for a bottle of water, instead coming face to label with Bisol’s Jeio Prosecco…

I awoke to remote reverberations of campanile and made my way to ‘Paolin’ for hazelnut ice cream. This is supposedly Venice’s oldest gelateria and also the site of my first Bloody Mary as an ‘Inter-railer’ a dozen years ago. I just had time to catch up with friend, cooking Contessa, Enrica Rocca, who recently hosted a garden party at her family’s 250 year-old Palazzo in Dorsoduro for Jamie Oliver’s ‘Jamie does… Venice’ programme. Our rendezvous was the statue of linguist, Nicolo’ Tommaseo, which locals call the ‘book shitter’ (it’s easy to see why). We ventured to the bustling 12th century Rialto fish market. Cooled beneath fabric blind eyelids within tall arches, lagoon specialities such as vicious looking cannochie crabs were jammed in crates almost as closely as the tourists and local shoppers looked in the street.

Genuinely concerned that I had neglected my duty to Prosecco, Renneau reeled me back. It was time, she announced, to go to Certosa for a Prosecco party. Just 15 minutes vaparetto from Venice, the island is relaxed and peaceful rather than ostentatious. Bisol has replaced a defunct military base with an airy 18 bedroom hotel and restaurant, nestled amongst low, dense trees. Each room was personalised by an artist in residence during the city’s architecture biennale. There is also a boat builder and sailing club, and university of fashion and design. Lining the paths are colourfully painted oil drums cut into varying heights and angles, giving the impression of being submerged (and in flood, they are). 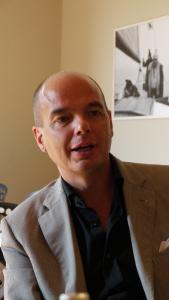 Over lunch we sampled Bisol’s elegant interpretation of the classic Prosecco producing region’s grand cru: Cartizze. Valued at over £700k per hectare, the 260 acre, 1,000ft sheer suntrap is divided among 140 owners. No doubt some producers marry for land. Compared to any other Prosecco, this rare wine appears softer, sweeter, chalkier and longer lived. The lagoon’s marshy landscape being suited to rice, it soothed a beady risotto of racing green ‘monk’s beard’ strands (a form of chicory), then visually startling, but pleasantly tasting squid ink tinted polenta. In time, Bisol aims to replant the island’s ancient vineyard as they have at Mazzorbo, where we now cut the water to aboard a glossy motoscafo.

A Taste of History

Along with brother, Desiderio (technical director) and consultant, Roberto Cipresso, Gianluca aims to produce one of the world’ top 10 whites in ‘homage’, he says, ‘to the history and culture of the lagoon, an area that has always been closely linked with Bisol’s home, Valdobbiadene.’ It is a brave project, not without challenges. Two years ago, the salty acqua alta trespassed the irregular bricks of the ancient walls, nearly poisoning young vines. 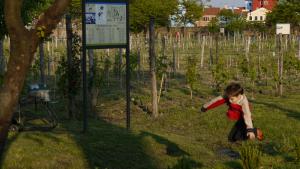 Headed by chef, Paola Budel, disciple of Michel Roux and Gualtiero Marchese, ‘Ristorante Venissa’ takes lagoon fish, Alpago lamb, the fruits of an onsite orchard and rich pickings of the kitchen garden, including wild garlic and artichokes, then delicately interprets them via her ‘De Manincor’ designed kitchen.

The wine will not be ready until 2011, when much of an anticipated 8,000 bottles are already reserved. For now, I was happy to taste Bisol’s ‘Fol’, a Prosecco from a swathe of sand and clay hills which look like castle mounds, close to Bisol’s winery. Their most savoury Prosecco, it had detailed aromas of dried flowers and a sprinkle of salt. If only this rendition was available in Blighty! 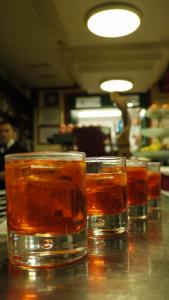 As night collected at the sky’s edges, we passed feline sentries on the bridge to Burano. The island built on lace and fishing has been gentrified with a brand new vaparetto stop close to houses owned by designer, Philippe Starck. As with Venissa, the ‘Riva Rosa’ restaurant stands testament to the demand of the discerning. It boasts a roof terrace so intimate that it redefines private dining.

Frankly overwhelmed by enough decadence for one day, I was content to sip a €1.50 ‘Spritz’ (refreshingly bitter, lurid Aperol, Prosecco and orange slices) at ‘Romana’. This trattoria is clearly an artists’ favourite, festooned with eclectic paintings, but strangely, ill lit. The chef showed us his chargrill, the only one for miles, naked flames being forbidden on Venice. Such a law seemed strange considering the streets are flooded…

We scored the flat calm lagoon back to Venice, its pink tinted streetlamps mirrored in the water. I now understood what photographers mean when they say that a picture taken in Venice is really in the water.

We docked at the courtyard of a bar which, when accessed from land, plays more hide than seek given the muddle of alleys. An unlikely match, Italian, Emilio and his Bristol born wife, Angela renovated the 12th century stables three years ago. Their opposing personalities are mortared in the counter, built of differing bricks. He wanted big bricks; she wanted small. The collage is the compromise. At Emilio’s insistence, we shared a cauldron of spaghetti woven with small, punchy tomatoes rinsed down with yet more Prosecco. I observed that whenever offered sparkling water, Renneau refused. ‘I only take bubbles in my wine,’ she said.

As the night wore on, Emilio, who looks not unlike a thinner, gracefully maturing Marlon Brando, told us that he came to Venice for the fishing after being fired from his role as finance director for Philip Morris tobacco. On being asked whether he smoked, he said ‘I’m not stupid – I’ve never smoked.’

The following morning we zig-zagged across the Grand Canal aboard a Traghetto (public gondola). Renneau explained that these ‘ferries’ are operated by gondoliers in training. At €0.50, this is a bargain means of getting a taster of the historic transport. Although it looked perilous, Venetians insist on standing for the journey. 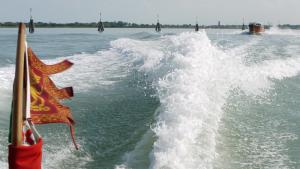 Our final dining destination was the rare garden of ‘Ristorante Ribot’ where we sampled cichetti, which are Italian tapas invented to absorb the ABV of perpetual bicchieri. Mirrored on a glossy black tile, soft salt cod spheres tore satisfyingly in the mouth. Pouring Prosecco, the owner said that no drinker of the wine ever falls in the canal. I wondered, in truth, whether they were simply too blotto to remember.

Reluctantly, I departed the lagoon for the screens and searches of Marco Polo airport. As I boarded the plane, which I secretly hoped might yet be grounded by ash, the taste of Prosecco was still on my lips. And true to Renneau’s promise, I was hangover free… 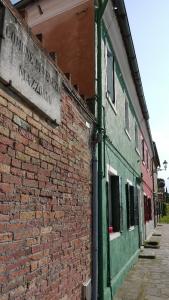 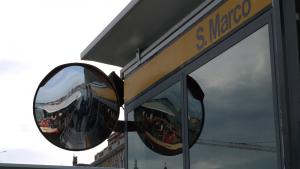 For an insight into the very best of Venice’s hostelries on the move, download I-Phone application, Tap Venice

By Foodepedia28 May 2010Features