Dynamic Rheingau restaurateur turned hotelier, turned riesling producer, Balthasar Ress is not shy of courting publicity. In June, ostensibly believing it would optimise the maturation of their top cuvée, they buried 18 magnums and one Balthazar of ‘RESSpekt’ 18m below the surface of a flooded quarry. Barring visits from thirsty, thieving divers, there it will rest until 2013.

One year before Ress planted 1/3ha of varieties, Rivaner and ‘Solaris’ on silt in Germany’s northernmost reaches. The ensuing wine, ’55’ will take the title of the 55th parallel in which it is grown. The latest project, which celebrates its first anniversary, is family head, Stefan Ress’ ‘Wine Bank’, developed with son, Christian. 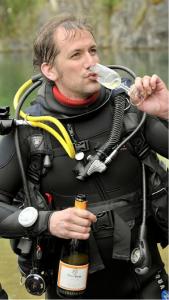 At the far end of a cobbled courtyard, digital swipe card gains 24-hour entry into a thoroughly rethought section of the firm’s 1922 cellars. Enhanced with slate from a quarry in Bacharach and gravel from the Taunus Hills, with LED lighting, art installations and a central bar loaded with crystal stemware, the space feels closer to a nightclub then a wine stowage facility.

The aim, other than providing secure, insurance friendly storage, is to allow wine collectors to convert virtual discussions with fellow members into actual ones; here they meet to share their bounty. I imagine it also appeals to voyeurs intrigued by other member’s collections – all is on display.

Despite another German wine producer criticising the initiative as ‘more Frankfurt than Hattenheim’, occupancy is apparently good. Tailored dishes may be ordered around the clock from local kitchen, Diktatur des Geschmacks. But beware, these savvy caterers levy a €200 supplement after 1am, making cravings for Saumagen (sow’s stomach) potentially costly.

It was in the Wine Bank that I sampled one of the highlights during my trip to Germany: the 2009 Riesling Auslese Hattenheim ‘Nussbrunnen’ (which means spring surrounded by nut trees). Despite a faint nose, the palate was near indefatagably long-lived, initially developing with power akin to a burst lozenge.

To the incessant thud of bass from the Wine Bank’s sound system, I sensed lime and orange marmalade within a finish which eventually tightened into an angular shape. Balthasar Ress own just 3.7 acres of the 24 acre site.

Also of interest at the visitor centre/events space upstairs, was the artfully faded 1870 poster from Britain’s oldest wine merchant, Berry Brothers and Rudd indicating how top flight riesling once commanded a significantly higher price than first growth Bordeaux. That was long before the days of dipsomaniac divers.